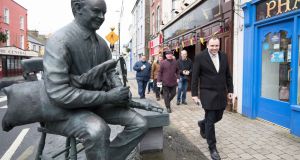 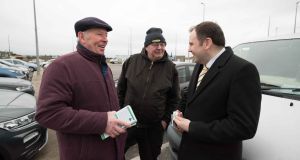 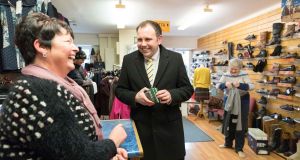 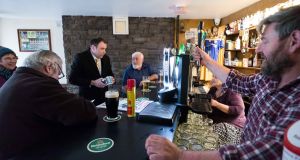 Cathal Crowe chats to John Burke, Michael Egan, and Deirdre and her son Vincent Downes in “The Malbay” bar while canvassing in Miltown Malbay, Co Clare. Photograph: Eamon Ward for The Irish Times 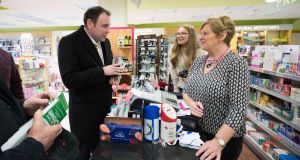 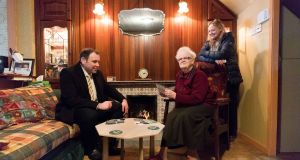 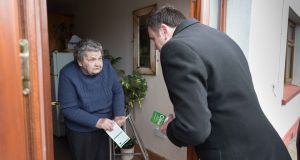 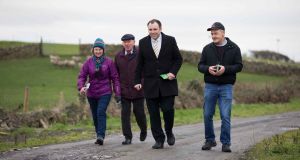 Fianna Fáil Mayor of Clare, Cathal Crowe, fired the first shots of general election 2020, when he decided to boycott the proposed commemoration of the Royal Irish Constabulary (RIC) in early January.

This sudden capture of the public mood breathed life and momentum into his campaign, transforming him from a dark horse, into a candidate with a realistic chance of topping the poll.

All this has not been lost on the local Fianna Fáil organisation in Co Clare. Cllr Crowe had 14 party stalwarts and friends with him when he canvassed Miltown Malbay recently, one of four separate canvassing teams working for him in the county that day.

Miltown Malbay has been hit hard by the recession. It has a long and proud history as a market town, but its main street is littered with shuttered businesses and its local population is hungry for change.

It was also the scene of a notorious RIC atrocity. On September 22nd, 1920, a combined force of RIC and Black and Tans burned out 16 homes and businesses in Miltown Malbay and the surrounding towns, killing five people.

Cllr Crowe might have been forgiven for assuming that he was on friendly territory in Miltown Malbay. However, as he finished his first circuit of the main street, he was met by a man shouting, “Am I any less of an Irish man than you?”.

The man, who declined to be identified, said he was the grandson of an RIC officer and that Cllr Crowe had stirred up division and animosity to serve his own political agenda.

Cllr Crowe declined to speak with the man, leaving him to a member of his canvassing team, but he later said that he would be happy to commemorate any individual RIC officer, but not the organisation itself.

“It’s absolutely not the case [that descendants of the RIC are any less Irish],” he said.

“I am a huge fan of history. I have an old RIC officer’s whistle in my office which was gifted to me a few years ago. We should talk about them [the RIC], we should learn about them, we should remember where their barracks were and that they were a feature of Irish life but I will not be celebrating or eulogising what the organisation was.”

Cllr Crowe received a positive reaction from the majority on the streets of Miltown Malbay, but the common refrain from locals was that rural Ireland is dying and recent governments have done nothing about it.

“Our great town is closed down. We have no industry in the west. We had three factories here in the 1970s and 1980s and its all gone,” said local man, Joe Cullen.

Marie Fox runs An Siopa Beag on Main Street in Miltown Malbay. She has little hope that the current crop of politicians will deliver a future for rural Ireland.

“Miltown is struggling. It’s a pity because we have a big population around us. VAT is a big issue, that’s something that the government can control, and rates on country premises should be pro rata with your income,” she said.

“Our rates need to be adjusted downwards big-time. How could anyone open a business in a country area the way things are. There has been no investment in the west, we have no employment and no industry other than tourism.

“We’ve had a lot of candidates into the shop this week but we’ve seen it all before. I think people are very apathetic. It’s another day and another face. We have 15 people running here in Clare and I don’t know one who would impress me over any of the others.

“I will vote. There is always hope, but if it’s anything like the past four years there is nothing in it for rural Ireland.”

According to Cllr Crowe, the creation of factories across towns in rural Ireland is no longer realistic, but action should be taken to make rural towns viable for the future.

“It’s not about having employment in every crossroad in rural Ireland, that is not realistic. But it is about creating a place where the local school isn’t fighting to stay open, the post office isn’t facing closure, there are guards doing patrols and there is a vibrant community at weekends and evenings,” he said.

“Fianna Fáil are looking at developing a special unit in the IDA focused on rural investment. We need to help start-up businesses in rural Ireland, so that all development is not focused on one part of the country.

“We also need to support GP practices, and we want to increase the supports currently in place for rural GPs [the Rural Practice Allowance Scheme] to €30,000 per annum.”

Cllr Crowe also said he would support increased resources for an Garda Síochána, the development of a rural resettlement programme and the construction of social housing in rural towns.