‘Would the Jews commemorate the Germans?’ asks grandson of murdered IRA man

Jimmy Lawless's grandfather was taken from his home on the night of September 21st, 1920 by the Black and Tans and killed. The memory of the killing lives in the minds of the electorate in Balbriggan. Video: Enda O'Dowd 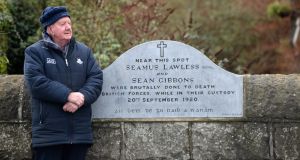 Jimmy Lawless, grandson of Séamus Lawless who was murdered by the Black and Tans in January 1920, at the spot he was killed on Bridge Street, Balbriggan. Photograph: Dara Mac Dónaill/The Irish Times

Jimmy Lawless has plastic bags and boxes of old certificates and yellowing photographs of his grandfather Séamus Lawless, who was killed by the Black and Tans in Balbriggan, Co Dublin.

His grandfather, a barber and an IRA lieutenant, and another man, Sean Gibbons, were taken from their homes on the night of September 20th-21st, 1920 by the notorious police reinforcements assigned by the British to the Royal Irish Constabulary during the War of Independence.

The Black and Tans killed the men and burned down parts of the town in what is known now as the Sack of Balbriggan in reprisal for the IRA’s killing of two RIC men.

Lawless and Gibbons were bayoneted in the local barracks on Bridge Street and their bodies dumped across the road. The two men are remembered every year in a ceremony at the well-kept commemorative plaque.

'I know there were Irish men who actually joined the RIC because they had no employment. It doesn’t condone them in my eyes. They were part and parcel of the crown forces'

In his living room, Lawless points to the cause of death on his grandfather’s death certificate. “Killed by being stabbed with sharp instruments by unknown men of the police forces of the crown,” it reads.

“This is the 100th anniversary of my grandfather’s murder. That’s what I call it. Both those men were murdered,” says Lawless, now 81, who was raised by his grandmother, Lawless’s widow.

His grandmother never spoke about her husband’s death to her grandson.

Remembering can be a tricky political business as Fine Gael learned to its cost before the general election was called for February 8th.

Taoiseach Leo Varadkar conceded in a TV debate last week that his government had messed up by attempting to hold a commemoration to the RIC last month without cross-party support.

An event to remember Irish men who served in the RIC and Dublin Metropolitan Police, planned for January 17th and hosted by Minister for Justice Charlie Flanagan, was called off after local politicians boycotted the event.

“The lesson is learned,” said Varadkar during the debate, pledging not to proceed with any other commemorations unless they had cross-party support. The Taoiseach was keen to insist that the commemoration was “never about the Black and Tans” but the damage was done.

A poll taken at the height of the controversy, just before the election was called last month, showed support for Fine Gael dropping by seven points.

Lawless, a lifelong Fianna Fáil supporter, said he shook the hand of Senator Lorraine Clifford-Lee, the party’s candidate in his Dublin Fingal constituency, when she called to his door last month and told him she did not agree with the RIC commemoration.

“I don’t agree with it either. Sure they are all part and parcel of the one thing,” he said of the connection between the RIC and the Black and Tans.

“I know there were Irish men who actually joined the RIC because they had no employment. It doesn’t condone them in my eyes. They were part and parcel of the crown forces.”

Clifford-Lee told The Irish Times that she was hearing complaints from people in Dublin Fingal about the RIC commemoration controversy during the first week of the campaign but not any more.

“It fed into the general narrative that Fine Gael are out of touch, arrogant and aloof. That does come up a lot,” she said.

On Bridge Street in Balbriggan, butcher Sean Browne, whose shop overlooks the plaque to Sean Lawless and Gibbons, said that many of his customers were “disappointed and surprised” that the Government were “commemorating killers”.

Asked whether he felt that it would hurt Fine Gael in Dublin Fingal in the election, Browne says: “It definitely won’t help. The Black and Tans done some desperate things in this town.”

Fine Gael is running two candidates in his constituency, sitting TD Alan Farrell and former minister for health and Senator, James Reilly. It has turned into a fight between them for what is thought to be only one seat for the party in this five-seater constituency.

'Leo ’fessed up. It wasn’t well done and there should have been cross-party consensus and everybody’s view taken into consideration'

On a canvass in a housing estate in neighbouring Skerries, Reilly told The Irish Times that the RIC commemoration had come up on the doorsteps “a little bit”.

“There were a lot of good people in the RIC and a lot of them went on to have a role in the formation of the Garda Síochána, ” he says.

“All that needs to be acknowledged but the way the thing was handled and the Black and Tans element not being clarified, was very poor, particularly for an area like this where Balbriggan suffered.”

Reilly has his own family story of the Black and Tans. They “sprayed bullets” into their farm in Lusk, Co Dublin when his mother and her sister, who were young children, were playing in the garden.

“They were just reviled, hated around here,” he said.

One woman answering her door to Reilly in Skerries on Friday evening says: “I wouldn’t be sore about it but I didn’t think it was a great idea.”

Remembering the RIC was one thing but the Black and Tans was very different, he says.

“Leo ’fessed up. It wasn’t well done and there should have been cross-party consensus and everybody’s view taken into consideration and have what was appropriate for the time we are in,” he says.

Lawless laughs when asked whether 100 years will be sufficient time passed to remember the RIC in the centenary of his grandfather’s murder at events planned for September.

“Would the Jews commemorate the Germans? I don’t think so, no matter how many years pass by,” he says.

“It was such a horrific thing to do to two men. I will never forget it.”