Children’s hustings: ‘You are meant to be someone kids like me can look up to’ 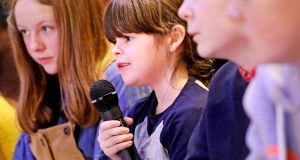 LillyRose Wogan (11) asking a question during the Children’s Hustings in The Ark in Temple Bar, Dublin. Photograph: Julien Behal

A young girl took the microphone and the room was silenced. A panel of politicians assembled to address the concerns and questions of Irish children probably did not expect a moment like this.

“I have a bully at school,” said the soft-spoken 12-year-old, “and I have two friends who are getting bullied by her too, and it’s really nice to have them there when I’m having a bad day.”

She could not imagine life without their help, she explained, and wished there was a way to give similar support to other bullied children, “just to be able to talk to people and feel safer.”

It was not your typical “issue on the doorstep” but then this was the Children’s Hustings on Tuesday, where the concerns of tomorrow’s voters are what matters today.

None of the five politicians could comprehensively address bullying supports, but then they were hit with a battery of questions from a room full of well-armed children at The Ark in Dublin’s Temple Bar.

What would the politicians do about climate change and air pollution; about funding for third level education? Could more not be done to address the root causes of mental health problems, the lack of equality in schools, a creaking direct provision system that was having a detrimental effect on many of their peers?

The event was jointly organised by the Children’s Rights Alliance, Barnardos, the ISPCC, SpunOut, The Ark and Young Social Innovators.

The candidates responded in turn, on their best behaviour. But such uncharacteristic harmony was called out by 11-year-old LillyRose Wogan.

“Why are some politicians rude to each other when Ireland needs a generous, willing person to help our country?” she asked.

“Sometimes I see on the news politicians calling each other names and blaming each other, and I don’t understand that as you are meant to be someone kids like me can look up to.”

The audience appeared on the cusp of a standing ovation. But the issue, coupled with another on the legacy of broken promises from 11-year-old Raymond Murphy, was addressed by the warring Bacik and Boyd Barrett through gritted-teeth smiles.

By going into government you often have to compromise . . . and that’s a sad reality of Irish politics

“If you’re not in government you can’t do anything with your promises, you’re only going to be in opposition shouting from the sidelines,” Bacik offered.

“We’ve always tried to be constructive but by going into government you often have to compromise . . . and that’s a sad reality of Irish politics.”

Boyd Barrett could not resist the bait. “Is it better to go into government but have to compromise some of your promises – or is it better to stay out and hold onto your principles?”