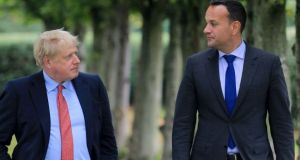 Last year was my first time voting in England, and I am still suffering from post-traumatic stress. Rather than the gentleman’s tussle over the centre-ground I’d become used to in Ireland, this British general election was a dogfight of radically different political agendas, pitting socialists against capitalists, immigrants versus nativists, the old versus the young. The argument was settled, but the societal rifts seem even deeper than before. The losers are bitter, and the winners are sore. In asserting its sovereignty from the European Union, Britain appears to have pressed the self-destruct button on the United Kingdom.

No one mentioned potholes once. My local candidates instead argued over big, bold ideas on a national scale. There were voices from the far left and the far right, all offering vastly divergent visions for the future. My constituency even had a Trotskyite candidate, calling for a general strike to bring down the government and smash capitalism. While the policies of early 20th century Bolshevik revolutionaries are not for me, coming from Kildare South it was refreshing to have the option.

As an electorate, we were required to pick a tribe. There was an “us” and a “them”. Owing at least in part to Britain’s first-past-the-post system, there is a strong sense of winners and losers – and the winners take it all. While Boris Johnson’s Conservatives got 45 per cent of the vote, the Darwinian nature of the set-up means they acquired 56 per cent of the seats. Huge swathes of the population find their voices ignored, while the scale of the Tory majority means there will be no need for compromise. Resentment swells, divisions become more pronounced, and the seeds for populism on the left and the right are sowed ever deeper.

By contrast, the run-up to Ireland’s general election has felt like a soothing balm. Rather than an interrogation of ideology, the campaign has felt at times like a battle of aesthetics.

On one side is polished, progressive Dubliner Leo Varadkar, who mixes well with men named Trudeau and Macron, but is less popular in towns named Tullow and Macroom. Then there is Micheál Martin, an everyman. Sure, he was part of the last Fianna Fáil government - but didn’t we all party? In fact, Martin may have partied less than most. While Varadkar has admitted to smoking dope in Trinity, Martin denies ever having taken drugs. Indeed, it’s unclear if he even knows what drugs look like - he would probably confuse a mound of cocaine for the pure, driven snow of which his soul is constituted. It is remarkable that Varadkar’s admission to smoking marijuana while a student has been a scandal comparable to Martin’s former colleague Brian Cowen appearing intoxicated on the radio while serving as taoiseach.

Neither Fianna Fáil nor Fine Gael are expected to win a majority. In fact, a shock poll this week put Sinn Féin out ahead as Ireland’s most popular political party.

Proportional representation means that if parties like Sinn Féin and the Greens receive the surge in support that polls suggest, they will win a proportional number of seats. Whoever does form a government will rely on support from one or more smaller parties and/or independents to do so. Compromise will have to be found. No one is completely left behind, at least not on the scale we see in the UK.

Whatever the outcome, the Irish general election is unlikely to be as bitterly polarising as its British equivalent. Moreover, the result will barely register in the consciousness of the English public; most barely follow the goings on in Northern Ireland, never mind the Republic. The morning after the election, Leavers were so jubilant and Remainers so traumatised that the historic nationalist victory in Northern Ireland was only mentioned in passing. Meanwhile, Scotland’s Scottish National Party (SNP) landslide was downplayed. The Tories said they’d simply deny them a referendum, as if that was the end of the matter.

It is unlikely even the Conservatives will be able to bear sheer, oppressive weight of this hypocrisy. In denying Scotland independence while asserting its own, Britain is the parent who criticises underage drinking while stumbling around puking in the child’s lunch box.

After centuries as a global hegemon, a weakened Britain joined the EU and confused compromise with oppression. Their subsequent cries for freedom have cheapened the very concept - it is sufficient now to merely imagine oneself to be oppressed to begin an independence movement. They have cast aside chains that didn’t exist, while keeping a boot on the necks of others. England is not the boy who cried wolf - it is the wolf, old and confused, growling at its own shadow.

The inevitably punishing nature of the renewed EU negotiations will only strengthen the calls for referendums in Scotland and Northern Ireland.

The Eurosceptics won the battle for Britain, but the existential crisis faced by the Union is only beginning. What’s worse is that they don’t seem to realise it. The morning after the election result, a gloating, Tory-supporting colleague of mine asked what I thought of the result. After I brought up the nationalist win in Northern Ireland, he was perplexed. “What’s a nationalist?” His intellectual curiosity didn’t last long. Moments later he was quoting Johnson’s now infamous “Lets get breakfast done” victory speech. “He’s a good laugh, he is!”. My first time voting in the United Kingdom could be my last.