Who attended the golf dinner and what has happened to them since? 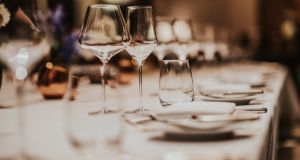 “You are hounding everybody, so no comment and goodbye,” said guest Loman Dempsey when contacted. Illustration: iStock

More than 80 guests attended an Oireachtas Golf Society dinner in the Station House Hotel, Clifden, Co Galway, last Wednesday at a time when Government regulations strictly limited indoor gatherings. Here is who was at it:

Table 1
At the “captain’s table” was Noel Grealish, Galway West TD and captain of the golf society; then minister for agriculture Dara Calleary and his wife, Siobhán; and EU trade commissioner Phil Hogan. Former Fianna Fáil minister Noel Dempsey and his wife, Bernadette, were also present.

Mr Calleary resigned as minister in the fallout from the event. Mr Hogan is now under intense pressure over his position.

Table 2
Former Fianna Fáil TD and senator Donie Cassidy had a table as president of the golf society. The Westmeath politician had eight guests at his table, according to the seating plan – understood to be mainly members of his family. Mr Cassidy resigned as vice-president of Fianna Fáil following the controversy.

Table 4
Former RTÉ radio presenter Sean O’Rourke was at a table of eight at the event. RTÉ announced on Monday it had cancelled a number of future projects with O’Rourke, which had included a planned weekend politics show.

The table included Senator Paddy Burke and councillor Enda McGloin, who both lost the Fine Gael whip as a result of their attendance. Dr Michael Harty, former TD and chair of the Oireachtas health committee, was also at the table.

Others included former Fine Gael senator Paul Coghlan, and John Flaherty, captain of the guard at Leinster House, who is responsible for health and safety in the Houses of the Oireachtas.

Table 5
Supreme Court judge Séamus Woulfe and Fianna Fáil Senator Paul Daly have both apologised for their attendance at the event.

Mr Justice Woulfe, who is a former attorney general, is now facing a Supreme Court-ordered review by former chief justice Susan Denham into whether he should have attended the event.

Daly, who attended the event with his partner, Bernie, was stripped of the party whip last week by Taoiseach Micheál Martin.

Galway businessman and owner of the Station House Hotel John Sweeney and his wife, Treena, were listed as guests at the table, as was the ambassador of Morocco.

Hayes, who is a former Fine Gael junior minister and MEP, apologised for attending the event, but said it did not affect his ability to fulfil his role as head of the BPFI. According to the seating plan, he also had three unnamed guests at the table.

Henry, who is no longer in politics and owns a consulting firm, apologised “unreservedly” for attending the event, adding that she attended in a personal capacity.

Table 7
Two Fianna Fáil Senators, Aidan Davitt and Niall Blaney, were among those seated at this table. Both have apologised for attending.

Taoiseach Micheál Martin has removed the party whip from both Senators. Mr Davitt has served as a Senator since 2016, while Mr Blaney was elected to the Seanad in 2020.

Table 8
Guests at this table included Fine Gael Senator Jerry Buttimer, who resigned as Leas Cathaoirleach of the Seanad, over the affair. His husband, Conchobar Ó Laoghaire, was also listed as a guest. Buttimer has said it was an “unintended but serious lapse of judgment in attending the event”.

Other guests were Senator John Cummins, twice mayor of Waterford and one of three Fine Gael Senators who had the party whip removed from them over the scandal.

Also at the table was former Independent TD Paudge Connolly, now a Monaghan County Councillor. The Irish Times revealed he was playing golf in Spain nine days previous to the dinner. Spain is not on the Government’s green list of countries, meaning people arriving back from there must quarantine for 14 days. Mr Connolly has yet to respond to a request for comment.

Table 9
Fianna Fáil Minister of State with responsibility for older people Áine Brady and her husband, Gerry, also a former Fianna Fáil TD for Kildare and a local auctioneer, headed up this table. Neither have responded to phone calls.

Kildare was under tightened lockdown restrictions at the time of the golf dinner, which meant residents were restricted to travel within the county, except for work, vital family or medical reasons. Brady is chief executive of Third Age, an organisation that supports older people in Ireland.

In a statement reported by the Leinster Leader, she said she was “disappointed that my actions may have distracted from the tremendous work that the organisation does, and I will redouble my efforts to ensure that these programmes will continue to deliver positive outcomes for older people and communities in Ireland.” She added: “I unreservedly apologise and deeply regret my attendance at last week’s event.”

There were eight other, as yet unidentified, guests at the Brady table, according to the table plans.

“I have no comment to make about that. You are hounding everybody, so no comment and goodbye,” he said when asked about his attendance.

Sean Dempsey, a former school principal who regularly canvassed for his brother Noel, was also listed as a guest.

Martin Brett, deputy chairman of Kilkenny County Council, was also at this table, along with a friend, Gerry Crowley. Mr Brett has said attendees were being wrongly “pilloried” and anyone who resigned over the scandal should be reinstated.

“There has been a serious level of witch hunt against everybody that was at the dinner … We didn’t breach any guidelines,” he said. Others listed at the table included Anne and Ciaran Dooley, who Mr Brett said, “worked in Brussels at one stage”.