Mary ‘May’ Cowen remembered as person of strength, strong faith and for her dedication to family 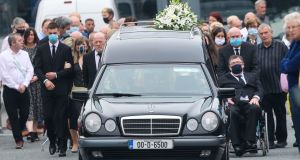 Mary ‘May’ Cowen, the mother of former taoiseach Brian Cowen and current TD for Laois-Offaly, Barry Cowen, was remembered on Saturday as a person of strength and strong faith, and a loving mother and wife.

Mourners at her funeral mass at St Brigid’s Church in Clara, Co Offaly, heard her described by celebrant Fr Joseph Deegan as having lived a life that was “long and full, loyal and faithful”.

She is survived by her sons, Brian, Christopher and Barry, her daughters-in-law Mary, Ann and Mary, and her grandchildren Jane, Stephen, Sinead, Meadbh, Gemma, Lorcan, Eoin and Aoibhe, as well as her two sisters Patsy Nolan and Nuala Farley, who live in the United States.

While attendance at the funeral was limited in line with Covid-19 restrictions, it was streamed live on YouTube, with over 1,000 people watching. A crowd of people also gathered outside the church to pay their respects. The online recording of the funeral had 3,700 views by teatime on Saturday.

Among the mourners were Fianna Fáil TD for Laois Offaly and Minister of State at the Department of Finance Sean Fleming and Joe Lennon, Brian Cowen’s former chief of staff.

Ms Cowen, who was born Mary Weir, moved to the United States aged just 16, living and working there for seven years before coming home to the “great joy” of her marriage to Ber Cowen, who would go on to serve as Fianna Fáil TD for Laois-Offaly for a combined eleven years, across two separate spells in the Dáil.

His death in 1984, which was remembered as a “painful and shocking experience” for her, led to a by-election won by her son Brian. She was remembered for the strong faith she relied on in that time, and her dedication to her family. Her work after her husband’s death, in raising the family, and keeping the many Cowen family businesses - which included a pub, butchers and undertakers - going was also recalled.

In a service which featured renditions of Ave Maria and Arms of an Angel, she was remembered as “quietly supporting” the political careers, firstly of Ber, and then latterly of Brian and Barry, “with a sure and solid motherly and loving wisdom and advice”, of “finding joy” in their successes and “feeling sadness in their struggles and disappointments”.

Her loving nature as a grandmother was spoken of by Fr Deegan, as was her “warm and open friendliness in the way she related to others”. Having suffered with illness in recent years, it was recalled how she did so with dignity and that she had remained “a woman of faith until the end”.