Timeline: How Phil Hogan became the centre of the golf dinner controversy 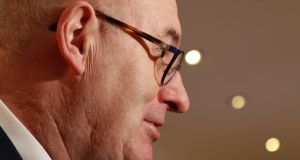 EU commissioner Phil Hogan has been at the centre of a major political controversy, as one of several high-profile politicians who attended an Oireachtas Golf Society dinner last week that had more than 80 guests, in apparent breach of public health guidelines amid the Covid-19 pandemic. He is facing calls to resign and scrutiny over his account of his movements after arriving back in Ireland. Here is the timeline of his role in the controversy:

July 30th: European Commissioner for Trade Phil Hogan arrived in Ireland from Brussels. Earlier that day he had a video call on trade reform and US-China relations, according to his diary.

Under public health guidelines, people arriving into Ireland from non-green-list countries, such as Belgium, must restrict their movements for 14 days.

HSE advice outlines that this means “avoiding contact with other people and social situations as much as possible”. After arriving in Ireland Mr Hogan was self-isolating at a residence he owns at the K Club, in Straffan, Co Kildare.

August 5th: Mr Hogan travelled to Dublin for a medical appointment, and stayed in a health facility overnight, where he was also tested for Covid-19 and received a negative result.

After his stay in the Dublin medical clinic he travelled to stay with a family member in Kilkenny for a period of convalescence.

August 8th: Following a spike in coronavirus cases linked to several outbreaks, counties Kildare, Laois and Offaly were put into an effective lockdown by the Government for two weeks.

The new restrictions meant people in the three counties would be allowed to travel only within their county, unless for work, medical, or family reasons. People who had to pass through the affected counties were asked not to stop while travelling through the area.

Public health rules for the rest of the country at this point restricted numbers attending indoor gatherings, such as weddings or other functions, to a strict limit of 50 people.

As the politicians and other attendees at the event were making their way around the 18 holes of the championship links course, a lengthy Cabinet meeting was under way that afternoon.

Shortly before 6pm in Dublin, Taoiseach Micheál Martin announced public health restrictions were being tightened, to combat the recent increase in Covid-19 cases in the State. The new measures included a limit for indoor gatherings of six people.

August 19th: The second day of the event started with another round of golf for the president’s prize, followed that evening by dinner at the Station House Hotel, in Clifden, at 8.30pm.

There were more than 80 guests at the dinner, including Mr Hogan, the then minister for agriculture Dara Calleary, Supreme Court judge Séamus Woulfe, and a host of former and sitting Oireachtas members – predominantly from Fine Gael and Fianna Fáil. There had been a divider in place splitting the room, but this was pulled back during a series of speeches at the event.

Mr Hogan was seated at the top table, with society captain Noel Grealish TD, Mr Calleary and his wife Siobhan, and former Fianna Fáil minister Noel Dempsey and his wife Bernadette, according to the seating plan.

August 20th: At 7pm the Irish Examiner broke the story of the dinner online under the headline: “Minister and 80 people at golf event in breach of public health guidelines.”

August 21st: The political and public outrage was swift, with several resignations on Friday morning amid the backlash.

Mr Calleary resigned as minister for agriculture, Senator Jerry Buttimer resigned as leas-chathaoirleach of the Seanad. The party whip was also removed from Fine Gael and Fianna Fáil Senators who attended.

At 10.58am Mr Hogan released his first statement addressing his attendance at the golf society dinner.

The former Fine Gael minister said he had attended it “on the clear understanding that the organisers and the hotel concerned had been assured by the Irish Hotels Federation that the arrangements proposed to be put in place would be in compliance with the Government’s guidelines”.

He added that he had “complied fully with the Government’s quarantine requirements, having been in Ireland since late July”.

Mr Hogan’s team began to field press queries digging into the commissioner’s movements between his return from Brussels in late July and the golf event, based on questions about whether he had spent time in Co Kildare.

A spokesman for Mr Hogan told The Irish Times at about 11.30am: “I’m not going to get into details of the commissioner’s personal movements, other than to assure you that he did not breach the lockdown rules to attend the golf event.”

Later another statement from his spokesman clarified that Mr Hogan “fulfilled quarantine/self-isolation requirements in accordance with Government requirements following his return to Ireland at the end of July. I can confirm that he did not breach Government guidelines relating to Co Kildare.”

“Mr Hogan left Kildare to fulfil a medical appointment prior to the implementation of the lockdown and went from there to Kilkenny for a period of convalescence and then went to Connemara for the golf tournament.

“He went to Dublin on August 12th for essential work reasons relating to his role with [the European] Commission. He needed to go to the commission’s office in Dublin to fulfil this duty and he met Tánaiste Leo Varadkar at this time,” the statement said.

Speaking on RTÉ’s Six One News, Mr Martin said he believed Mr Hogan should apologise for attending the dinner. “I would like a meaningful response to the mood of the public and the anger of the public towards this issue,” he said.

Following this intervention, Mr Hogan released a statement clarifying he “does apologise for any distress caused by his attendance” at the dinner.

Shortly afterwards his spokesman sent out a revised statement which said that Mr Hogan apologised for his attendance, with the reference to “any distress caused” removed.

August 22nd: Mr Hogan returned to Brussels on Saturday. In a statement that evening, both Mr Martin and Mr Varadkar said they had asked him to “consider his position” as EU commissioner over the debacle.

August 23rd: Despite continuing pressure, Mr Hogan’s spokesman reiterated that the commissioner would not be resigning from his post.

“I acknowledge my actions have touched a nerve for the people of Ireland, something for which I am profoundly sorry. I realise fully the unnecessary stress, risk and offence caused to the people of Ireland by my attendance at such an event, at such a difficult time for all, and I am extremely sorry for this,” he said.

There was another significant development in the story just after 9pm. It transpired that Mr Hogan had been stopped by a garda for using his mobile phone while driving to the golf society event.

He had been stopped while in Co Kildare – a county under lockdown – while en route from Kilkenny to Clifden on August 17th. The new revelations called into question previous statements emphatically denying he had breached restrictions in Co Kildare.

In a statement Mr Hogan’s spokesman said: “He stopped briefly at his apartment [in the K Club] to collect personal belongings and essential documents relating to the EU-US trade negotiations, which continued while the commissioner was in Galway.”

In Brussels, Mr Hogan presented a report on the controversy to president of the European Commission Ursula von der Leyen, who is considering the matter, and, crucially, has the power to remove him from office.