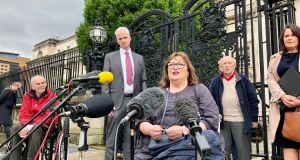 The North’s justice department will administer a compensation scheme in a major step forward for the worst injured victims of the Troubles.

Deputy First Minister Michelle O’Neill agreed to progress the payments after a judge ruled that an ongoing delay was unlawful.

The Sinn Féin vice-president was highly criticised by the Belfast High Court for refusing to comply with a legislative requirement to set up the scheme to gain political leverage over the UK government.

The Executive Office said: “The office has also agreed to provide grants to the Department of Justice to establish the administrative arrangements for the scheme.

“This will allow the recruitment of board members, IT developments, and other steps needed to establish the board to proceed.”

The joint legal challenge against the delay was brought by Jennifer McNern, who lost both legs in a Troubles bombing in 1972, and Brian Turley, one of the “hooded men” who were arrested and interrogated by the British Army in 1971.

The payment scheme is in limbo due to a dispute between Sinn Féin and the UK government over eligibility criteria that are set to exclude anyone convicted of inflicting serious harm during the Troubles.

It was due to open for applications at the end of May but little progress has been made due to a failure by the Executive Office (TEO) which is shared by Ms O’Neill and First Minister Arlene Foster, to nominate a Stormont department to take responsibility for it.

Sinn Féin claims the scheme, which was legislated for at Westminster, would be discriminatory and would potentially exclude thousands of republicans with past convictions.

In a separate row, Sinn Féin and the DUP have jointly been at odds with the UK government over who should pay for the scheme.

Justice minister Naomi Long said: “It is clear that there remains a lack of political agreement over aspects of the scheme and, in particular, there is an urgent need to resolve the source of funding for the payments.

“I am absolutely clear that the UK Government has a critical role to play in this regard.”

Initially, Ms O’Neill and Mrs Foster refused to progress with the scheme — Mrs Foster citing the funding issue and Ms O’Neill objecting on the twin grounds of funding and eligibility.

However, Mrs Foster subsequently dropped her opposition and during the court hearing the judge was told the First Minister was now willing to designate a department immediately.

That left Ms O’Neill as the sole cause of the delay within TEO for nominating the department, as the agreement of both ministers is required for the joint office to act.

Ms Long said she was committed to taking the scheme forward as quickly as possible.

She said: “There will be a number of steps which need to be gone through before the scheme can open for applications, and before payments can commence: however, today’s developments mean work on the new scheme can be advanced in earnest.

“My officials will keep interested parties informed at each stage and of expected timelines as the work develops.”

DUP victims’ spokesman Sir Jeffrey Donaldson said the blockage by Sinn Féin to progressing the pension was not only outside the law but also lacking in compassion for the innocent victims who did qualify.

“It is another step in the right direction for innocent victims who have campaigned for such a payment for the best part of this decade,” he said.

“Sinn Féin’s objection to bombers being excluded from this pension makes no sense to the vast majority of people in Northern Ireland. ”–PA