If Ursula von der Leyen accepts his report, Government will not seek his resignation 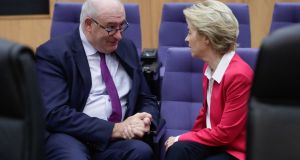 Phil Hogan’s fate as European Commissioner hangs in the balance as the President of the Commission, Ursula von der Leyen, awaits his “full report” on the controversial Oireachtas Golf Society dinner and his possible violation of Covid restrictions.

Mr Hogan was one of more than 80 people, including a number of senior politicians and a member of the judiciary, who attend the dinner in Clifden, Co Galway last Wedneday, in apparent contravention of Covid-19 restrictions.

Yesterday Mr Hogan’s spokesman confirmed he went from Kilkenny to the K-Club on his way to Clifden last week to collect personal belongings and “essential” work papers.

In a statement, Mr Hogan’s spokesman said the commissioner was stopped by a garda for using his mobile phone while driving while he was in Kildare en route to Clifden. “He stopped briefly at his apartment [in the K-Club in Kildare] to collect personal belongings and essential documents relating to the EU-US trade negotiations, which continued while the Commissioner was in Galway.”

Mr Hogan’s spokesman said he was cautioned and he did not receive penalty points.

The Government will await Ms von der Leyen’s judgment when she receives the trade commissioner’s report, according to high ranking sources.

Taoiseach Micheál Martin has not spoken to Ms von der Leyen about Mr Hogan’s future, indicating that if she is satisfied with the former Fine Gael minister’s explanations, the Government will not seek his removal as commissioner.

Ms von der Leyen, who is said by her spokesman to be “following the situation closely”, has requested a detailed report from Mr Hogan about his attendance at the dinner and travel in Ireland prior to the event.

Officials in Dublin and Brussels said she is expected to make a decision about Mr Hogan’s future after considering his account. Government sources stressed that Dublin has no legal authority over Mr Hogan, who is solely accountable to the European Commission.

On Saturday evening, following consultations with the Green Party leader, Eamon Ryan, the Taoiseach and Tánaiste Leo Varadkar called for Mr Hogan to “consider his position” .

However, Mr Varadkar said he needed to provide further explanations, especially about whether he may have broken the terms of the local lockdown in Co Kildare, where he has a residence at the K-Club golf resort.

If Mr Hogan is unable to do this, “then he needs to consider his position”.

Meanwhile, gardaí have been in contact with staff at the Station House Hotel in Clifden, where the Oireachtas Golf Society function was held.

There is also growing speculation in Government about the future of Supreme Court judge Séamus Woulfe, who also attended the event. He is expected to meet the Chief Justice Frank Clarke to discuss the matter.