When the fragile peace process verged of extinction – 1997 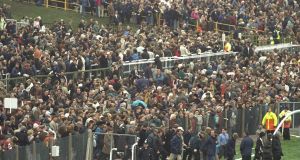 Crowds file on to the Aintree racecourse in Liverpool due to the IRA bomb scare that led to postponment of the Grand National. File photograph: Mike Cooper/Allsport.

In 1997 the peace process often seemed to be on the brink of extinction. Having declared its “complete cessation of military operations” three years previously, the IRA broke its ceasefire with the Docklands bombing of February 1996.

In the early months of 1997 it became clear republicans had lost faith in the ability of the then Conservative prime minister John Major to deliver the concessions they demanded. They held back the prize of a restoration of the IRA ceasefire in the expectation that new Labour leader Tony Blair would soon be the man in charge at Downing Street.

The British and Irish governments pushed ahead with political negotiations, trying to ensure the momentum provided by the 1994 paramilitary ceasefires was not lost. But talks chairman US senator George Mitchell warned he was battling the “twin demons of violence and intransigence”.

The first demon was a brutal litany of killings, some of them admitted by paramilitary factions, others carried out without any claim of responsibility from the perpetrators.

The other demon – in Mitchell’s view – was the resistance he faced from elements within unionism, principally the then DUP leader Ian Paisley and UK Unionist Party leader Bob McCartney, to any attempt to inch forward in the convoluted discussions inside Stormont’s unprepossessing Castle Buildings.

With no ceasefire in place, the IRA campaign continued, and Sinn Féin were consequently excluded from the negotiations. There were bloodless republican publicity coups, like the hoax bomb warnings that forced the abandonment of the year’s Grand National steeplechase at the Aintree racecourse.

However other IRA activities proved this was no “phoney war”. Lance Bombardier Stephen Restorick was shot dead by an IRA sniper in Bessbrook, south Armagh. I recall making my way down to the house of Lorraine McElroy. She had chatted to the 23-year-old soldier at a vehicle checkpoint, moments before the sniper’s shot rang out, killing him and covering her with his blood. Lorraine vividly described the smile on Stephen’s face in the seconds before he died.

The violence didn’t stop with the arrival of a new prime minister. Instead, before reinstating their ceasefire, the IRA murdered two police officers, Roland Graham and David Johnston, at close quarters as they patrolled the streets of Lurgan.

Against many expectations, the loyalist paramilitaries of the Ulster Volunteer Force (UVF) and Ulster Freedom Fighters (a cover name for the Ulster Defence Association) did not match the IRA by formally declaring their ceasefire over. The influence of newly emergent leaders like David Ervine and Gary McMichael kept the loyalist truce intact, after a fashion.

However, the influence of hard-line Portadown based gunman Billy Wright grew throughout the year, prompting an open feud between his Loyalist Volunteer Force and his former comrades in the UVF. Wright – known by his sobriquet “King Rat” – was linked to dozens of murders around mid-Ulster. But eventually he was jailed for threatening a woman. Just before 1997 ended he was assassinated inside the Maze jail.

Away from the paramilitary feuding, many innocent men, women and children were victims of sectarian murders during 1997. Among them the 18-year-old Catholic Bernadette Martin who was shot dead as she lay asleep in bed at her Protestant boyfriend’s home, schoolboy James Morgan (16) tortured before his body was dumped in a pit full of animal parts, Seán Brown (61) abducted by loyalists as he locked the gates at his GAA club and Robert Hamill (25) – whose killing was later the subject of a public inquiry – beaten to death by a crowd of loyalists.

The brutality did not end there. A police officer was shot dead by the INLA as he drank with friends in a gay bar in Belfast. Another RUC officer was beaten to death by loyalist bandsmen outside a pub in Ballymoney after a row over the policing of parades.

At times even the most optimistic could be forgiven for concurring with the view of Conservative sceptic Andrew Hunter who predicted at the start of 1997 that the “present peace process will fade away into nothing in a relatively short period of time”.

However two new leaders representing a younger generation took over the reins of power in Britain and Ireland in the summer of 1997, each of them determined to prove the doubters wrong. The 45-year-old Bertie Ahern established an immediate rapport with the 44-year-old Blair. Both grasped not only the size of the challenge, but also the opportunity to halt three decades of conflict.

Blair appointed Mo Mowlam as northern secretary. As the marching season began, she quickly discovered the limits to trying to make friends on every side.

Drumcree remained unresolved but, under new political management and with the IRA ceasefire restored, the Castle Buildings talks got back into gear. Over the summer, representatives of the Stormont parties travelled to South Africa, where Nelson Mandela urged them to draw on his nation’s experience in transforming a bitter conflict into a new beginning.

The British and Irish governments set up an international body to tackle the thorny issue of paramilitary disarmament. Sinn Féin leaders assented to the principles on peace and democracy drawn up by Mitchell – a move which so disconcerted some Irish republicans they began plotting a new breakaway faction, which became known as the Real IRA.

Even before Gerry Adams and Martin McGuinness arrived at the Castle Buildings talks, Paisley and McCartney had walked out, arguing that no unionist should stay to sit down with terrorists. After missing the formal start of a new negotiating round, David Trimble turned up, flanked by the two loyalist parties. The Ulster Unionist leader pledged to fight the unionist corner but signalled he would not, initially, be talking to Sinn Féin directly.

The talks adopted the three-stranded approach so beloved by SDLP leader John Hume, working on internal Northern Ireland matters, North-South issues and British-Irish relations. Another quango, the Parades Commission, was created to try to handle volatile disputes over marching.

Nothing was inevitable. In November, one Sinn Féin negotiator, Francie Molloy, told republicans in south Armagh that if the talks collapsed “we simply go back to what we know best”. As Christmas approached, an Apprentice Boys parade in Derry sparked more serious rioting.

As the new year began, no one could know for sure if 1998 would be the year of an historic compromise or just another staging post in the long battle against Mitchell’s twin demons of violence and intransigence.

Mark Devenport was the BBC’s Ireland Correspondent in 1997 and was BBC Northern Ireland’s Political Editor between 1999 and October 2020.

What files are being released today?

Some details have been redacted or withheld.

The UK is phasing in the earlier release of state documents and will eventually declassify the majority of them after 20 years rather than 30 years as was originally the case.

The British national archives in London is releasing its state papers tomorrow (Wednesday), albeit a smaller volume due to the Covid-19 crisis.

State papers in the Republic continue to be declassified only after 30 years have passed, meaning this year’s release dated from 1990.