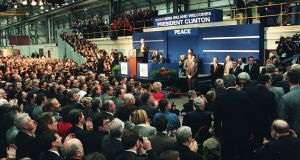 Bill Clinton at Mackie’s factory, Belfast, in 1995. He was the first sitting US president to visit Northern Ireland. File photograph: Eric Luke

Civil servants were opposed to John Major taking part in US president Bill Clinton’s historic visit to Northern Ireland in case it resulted in the prime minister having to avoid a direct meeting with Sinn Féin’s Gerry Adams in an “undignified hiding-behind-potted-plants scenario”.

In 1995, Mr Clinton was the first sitting US president to visit Northern Ireland. New government papers released by the National Archives in London show moves to dissuade Mr Major from attending events during the visit.

On November 30th, 1995, Mr Clinton visited the Shankill Road and the Falls Road, where he shook hands with Mr Adams. He also visited Derry, Armagh and Omagh and turned on the Christmas lights outside Belfast City Hall, in front of thousands of onlookers.

According to memos between various British government departments, Mr Major said he wanted to be part of one event, such as a reception, but this brought up problems of who to invite.

“But this would inevitably include Adams, and the prime minister does not think that Clinton’s visit is the right occasion or context for him to meet Adams for the first time,”said Edward Oakden, former private secretary for foreign affairs to Mr Major.

“Sinn Féin will need to earn such a meeting. And there is little attraction to us in any suggestion of the meeting taking place under US auspices.”

The Northern Ireland Office was opposed to Mr Major being involved in a reception because of the difficulties that it would bring up.

“Sinn Féin will almost certainly be invited to the reception. We cannot see a way of the prime minister avoiding Gerry Adams without reverting to the undignified hiding-behind-potted-plants scenario, which creates almost as valuable a news story as the first handshake,” wrote Robert Crawford of the Northern Ireland office.

“There is a real risk of political damage if the prime minister is too closely associated with this part of the president’s visit – the unionist community still mistrusts the president, and the nationalist community [particularly Sinn Féin] will be ready to make capital of perceived slights.”

Northern Ireland secretary of state Patrick Mayhew and other senior British government figures explained their concerns to the prime minister.

However, Mr Major was insistent on having some sort of meeting in Northern Ireland, as previously Mr Clinton had changed his schedule to meet the prime minister in Pittsburgh.

In the run-up to the visit by Mr Clinton, memos show the scepticism that the British had of the Democrat president.

“But we must avoid having the Americans taking over the Northern Ireland leg and presenting Clinton as peacemaker between HMG [Her Majesty’s Government] and the Nationalists,” wrote one diplomat.

In a briefing note to Mr Major before the events, Mr Oakden advised “to brief the president on the latest state of play and to ensure, so far as possible, that US involvement remains balanced, constructive and helpful towards the achievement of our objectives”.

“On Northern Ireland, there will be a tendency for Clinton to seek the limelight as an Irish peacemaker,” Mr Oakden said.

Following a briefing from the American side, Mr Oakden said “what [Clinton] wants is a demonstration that the peace process which he (according to the Clinton gospel) helped to launch is still in being.”

In the end, the final plan for a short, late night dinner between the two leaders was dropped after it was presumed that it did not make sense after a long and busy day’s events.