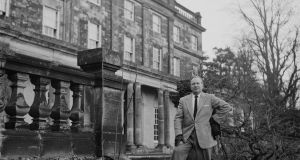 One Washington-based letter writer wrote several times to taoiseach Charles Haughey, urging him to use the writings of L Ron Hubbard, founder of the Church of Scientology, to resolve the conflict in Northern Ireland. Photograph: Chris Ware/Getty Images

Scientology could have ended the Troubles in Northern Ireland. Encouraging the mass migration of Irish citizens from the Republic to Northern Ireland might also have worked.

That’s if you believe the advice given by members of the public to taoiseach Charlie Haughey in the late 1980s.

His office accumulated a hefty file of letters from the public about the Troubles and some suggestions were quite novel. One Washington-based letter writer wrote several times to Haughey, urging him to use the writings of L Ron Hubbard, founder of the Church of Scientology, to resolve the conflict. He specifically highlighted Hubbard’s theory of Third Party Law which he said would bring about peace if applied to Northern Ireland. According to the theory, a third party must be present and unknown for a conflict to occur.

The letters had been acknowledged by Haughey’s office but the letter writer expressed dismay at the lack of a personal response from the taoiseach. President Hillery had personally answered four of his letters, he noted.

Writing from Dorset, a correspondent advised Haughey to encourage the building up of the nationalist vote in Northern Ireland to force change through the ballot box. “I seriously think that Éire citizens should be persuaded to emigrate to Ulster for the time being,” he said. “Irish Americans should also consider coming along too, as the vote through the ballot box must come soon.”

And he wanted a helping hand from the US government. “I was hoping that a sum in the region of £3.5 billion would have been extracted from them, because when Éire takes over Ulster, the province needs to be extremely prosperous.” After re-unification, he proposed that all-Ireland elections be held and the seat of government alternate between Stormont and Dublin.

However, a Belfast man had very different views and informed Haughey that the Republic was a failed entity, and not Northern Ireland. “If you just leave the people in the North alone or assist by taking the Republican element from the North to the South, it would reduce the conflict in Ulster. Evidently they will feel more at home in an ‘Irish’ environment.”

He said Irish-Americans would be more usefully employed agitating for an American democracy in the Republic “or making it the 52nd state of America”. The letter writer also advised the taoiseach to encourage birth control in the Republic, as a way of dealing with the problem of unemployment and emigration. “Why should the Republic be allowed, without censure, to propagate at twice the European average, and exploit the generosity of Britain and America because clerics intimidate families with purgatorial punishment . . . ?” he asked.

By contrast, a letter writer from Yorkshire encouraged Haughey to ask the International Court of Justice for the return of all land in Northern Ireland to the Republic.

‘Arrest every one of them’

Haughey should first ask Sinn Féin, the IRA and the INLA if this would be enough for them. “If they say no, arrest every one of them and keep them in jail,” he advised. Then he should charge Britain a certain amount for renting the land, “recovering what they can from rich landowners, and save millions by recalling the bulk of the military”.

“The British will of course keep their possessions, customs, religion and the right to send representatives to Westminster and to local government.”

A British letter-writer from the Cotswolds told Haughey the typical British citizen was “sick to the teeth of the problems in Belfast and thereabouts” and had little sympathy for the fanatical religious people of Northern Ireland, “notably Protestants”, who had brought much of the problem on themselves “by their posturing, bragging and downright provocation”.

He encouraged the taoiseach to immediately stop doing business with British prime minister Margaret Thatcher because “she has outlived her usefulness”. And he urged Mr Haughey to allow the British soldiers serving in Northern Ireland to be left alone to do their work because they were “mere pawns to be pitied”. Most of them were there because it was “a steady living in an increasingly hostile world”, he said.