Minister responds to internal documents released by Department of Justice 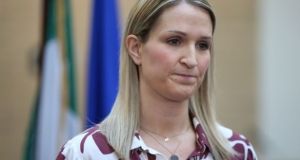 Minister for Justice Helen McEntee: she was not going to bring forward a nomination having not seen other names. Photograph: Nick Bradshaw

Minister for Justice Helen McEntee has confirmed she intended to bring a nomination to Cabinet to fill the vacancy to the Supreme Court a little over a week after her appointment but deferred the decision because she only became aware of the names of all the suitable candidates on that day.

Ms McEntee was responding to documents released by the Department of Justice which show she requested her officials to bring a name of a candidate to Cabinet on July 6th, five days before she consulted with the Taoiseach, the Tánaiste and the Green Party leader on her recommendation of Séamus Woulfe, and nine days before the eventual decision was made.

A draft memorandum to Government seeking approval to fill the vacancy to the Supreme Court was approved by Ms McEntee on the morning of July 6th, a little over a week after her appointment to the justice portfolio.

Labour leader Alan Kelly told the Dáil on Thursday the nomination was for former attorney general Mr Woulfe. However, Ms McEntee indicated that no such assumption could be made.

A speaking note was also prepared for the Cabinet meeting that day “in relation to an appointment to the Supreme Court”, according to internal Department of Justice correspondence and documents which were published on its website on Wednesday.

The correspondence shows Ms McEntee wanted the appointment to be made at the meeting of Ministers that afternoon. However, shortly after midday an official wrote in an email that the matter would not be taken at Cabinet that day.

Asked why she only withdrew the memorandum and the nomination a matter of hours before the Cabinet meeting, and not having consulted with party leaders as is required under the Cabinet handbook, Ms McEntee said: “It was made apparent to me on the very first day that this [appointment] needed to happen. The wheels were put in motion but it did not go ahead.

“I only received all of the subsequent names once the submission was given to me. Clearly I was not going to bring forward a nomination having not seen other names.”

Speaking at a launch of legislation on hate crime at Government Buildings, Ms McEntee said she had been told on her first day as Minister that this appointment needed to be made urgently and that was why she requested the memorandum for Government at such an early stage.

“This was put on the agenda. I had not received, and did not receive, all of the names [of eligible candidates] until the 6th [of July].

“Even though a memo was being prepared for Cabinet I made a decision not to bring it to Cabinet because I did not see the names and did not have a chance to engage with the Taoiseach, the Tánaiste and Minister [Eamon] Ryan or the Attorney General.”

She said she had intended to bring a name to Cabinet that day but made a decision sometime after 11.17am not to bring a name forward to the Cabinet as she had not received the other names. The Cabinet meeting occurred that afternoon.

In the Dáil, Sinn Féin finance spokesman Pearse Doherty said the Minister needed to clarify her remarks to the Dáil in her address on the issue.

Mr Doherty said Ms McEntee failed to outline in the Dáil that after looking at all the lists of eligible names she decided “within minutes” and “the only person who she consulted with, or spoke to, before that was the Tánaiste”.

Tánaiste Leo Varadkar told him the appointment was not brought to Cabinet on July 6th but several weeks later and the Minister had “ample time to consider all the names and also to discuss the matter with me, the Taoiseach, the leader of the Green Party and the Attorney General”.