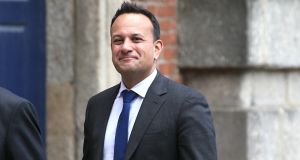 Mr Harris’s officials had warned that any leak of the document would endanger the agreement. Mr Varadkar apologised in the Dáil before Christmas for the leak, which happened in April 2019 when he was taoiseach.

Mr Varadkar’s spokesman insisted that he had sent an earlier draft of the contract to Mr Ó Tuathail, while Mr Harris was seeking a later version from his officials.

Records released under the Freedom of Information Act to the Sinn Féin TD Pearse Doherty and seen by The Irish Times show increasingly urgent attempts by Mr Harris to obtain a copy of the draft agreement between the State and the Irish Medical Organisation (IMO). This was happening at the same time as Mr Varadkar had posted a copy to the home address of Dr Ó Tuathail, who was head of the now-defunct National Association of General Practitioners (NAGP).

Mr Varadkar told the Dáil he provided a copy of the document to Dr Ó Tuathail “most likely on 15th or 16th April” 2019. Departmental records show that Mr Harris’s adviser emailed senior officials on April 15th wondering “if the document has been completed and if the minister can have a copy”. She also asked: “Is it possible to publish the document?” A few minutes later, one of the officials responded with a one-line email: “The agreement document has not yet been finalised.”

Later that morning, a senior official, Feargal Goodman, added a further response, explaining the reason for not providing the document to the minister. “There is some final material to be agreed with the IMO and the parties are exchanging draft text in this regard.”

He wrote that he discussed publishing the document with the IMO, which agreed that “the timing of this (once the document has been finalised) should be the subject of an agreed approach between the parties...

“The IMO are commencing their regional meetings this evening (with a Dublin meeting at which maybe 100 GPs will be in attendance) and it is important to allow this process to get under way in a manner that maximises the chances of the IMO securing GP buy-in,” he said.

However, two days later Mr Harris issued a blunt instruction to one of his senior officials just after 9am. The email reads: “I will require today the current draft of the 130-page document relating to the GP agreement. I appreciate there are ongoing tweaks etc but I myself need to read current draft today.”

Internal emails also show the IMO was very sensitive about any leaking of the document. One official warned the IMO believed it would be “very problematic” for the organisation if it was published and that any leaking would “represent a serious breach of trust”.

A spokesman for Mr Varadkar said: “As the Tánaiste explained to the Dáil in November, he received a copy of the agreement made with the IMO from the minister for health around April 4th or 5th.

“This was the agreement which was publicly referenced at the time by the IMO, the HSE, the then taoiseach and the minister, and is the version which was given to Matt Ó Tuathail. In the period following the public announcement of the deal there were further discussions between the HSE and the IMO which resulted in some minor changes. Our understanding is that the minister was looking for an up-to-date copy following Dáil exchanges in mid-April.”

Mr Doherty said last night: “This scandal goes far deeper than we thought. It goes beyond the old boys’ network and tears apart Leo Varadkar’s defence of his actions.

“He needs to explain how he was able to get his hands on a document, and provide it to his friend, that was so confidential that the minister for health was being denied a copy by his own officials.

“He needs to explain why he said this information was in the public domain when these documents prove that negotiations with the IMO were still ongoing. In fact, these documents show that officials had warned that publication without the consent of the IMO would be a serious breach of trust.”