Covid-19: Almost half of recent arrivals did not confirm place of residence 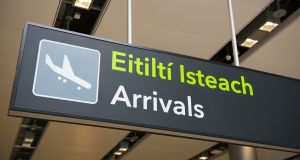 Almost half of passengers arriving into Ireland in December and early January who were contacted by telephone to confirm their place of residence either failed or refused to do so.

Social Democrats co-leader Catherine Murphy said the figures expose a significant level of non-compliance with the protocols by people arriving into Ireland, and demonstrates that the system to prevent Covid-19 carriers from entering the State has not worked.

The Department of Health confirmed that almost 140,000 intending passengers filled out electronic passenger locator forms between December 11th and January 3rd. However, because of a travel ban imposed by the UK on December 21st, not all of them arrived in Ireland.

The purpose of the forms is to disclose the location of the person while self-isolating after arrival. All those who arrive receive a text asking them to confirm their address. If they do not respond, officials make follow-up calls.

It was previously disclosed that about one in five of all passengers do not respond to the text and are then contacted by phone.

Minister for Health Stephen Donnelly, in a reply to a parliamentary question tabled by Ms Murphy, said that 51 per cent of those who received calls confirmed their place of residence. Ms Murphy told The Irish Times that meant almost half of those contacted had failed to confirm their location.

She said anecdotal evidence suggested many people flying into Ireland over Christmas did not self-isolate.

“There is a high level of non-compliance,” said Ms Murphy who, with her party’s co-leader Róisín Shortall, has campaigned since last March for tighter restrictions on incoming passengers.

“It is a huge frustration,” said the Kildare North TD. “This virus does not blow in on the Saharan wind. It comes in with aeroplanes and comes in with people.” She said the current guidelines have no real consequences.

Ms Murphy said she was open to suggestions by senior medics that people self-isolate in hotels for 14 days as happens in Australia. However, she cautioned it would have to be done carefully.

Meanwhile, the Government has said it is confident “early teething problems” with the new PCR testing system had been overcome.

Under the new health regulations, passengers must produce evidence of a negative result from a PCR test taken within 72 hours of travelling.

The regulations state they will be “denied boarding by the carrier” if they cannot produce evidence of the test.

However, the Garda Síochána reported it investigated approximately 80 cases of people arriving into Ireland without the relevant PCR test in the first week of the operation. Those people were not turned back but allowed to continue their journey into Ireland with a caution.

A file was referred to the Director of Public Prosecutions in each case. Non-compliance with the regulations can result in a fine of €2,500, or six months imprisonment.