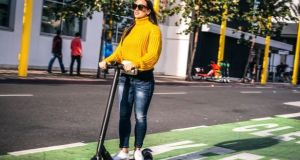 A new Road Traffic Bill will legislate for e-transport for the first time, including e-scooters. File photograph

The Government intends to publish a total of 32 Bills this spring, including a Bill that will enforce maximum speed limits of 40kmph on the M50 and legislate for scooters for the first time.

Government Chief Whip Jack Chambers has published a list of proposed legislation including Programme for Government commitments such as the Climate Action Bill, the Affordable Housing Bill, the Parents Leave and Benefit Bill –which will extend parental leave and also open it to same-sex adoptive couples – and a ban on fur farming through the Animal Health and Welfare (Prohibition of Fur Farming) Bill.

While it is unlikely that all the Bills will be published by the end of the Easter recess, there is also a very big agenda for Oireachtas Committees, who are being asked to subject 48 pieces of proposed legislation to pre-legislative scrutiny.

The Department of Justice is the most active department, with eight Bills being prepared for publication. Among them is the Judicial Appointments Commission Bill, legislation to replace the oft-criticised compensation procedure for gardaí injured in the course of their duty, and a bill to repeal mandatory minimum sentences for second or subsequent firearms/misuse of drugs offences.

A new Road Traffic (Miscellaneous Provisions) Bill is likely to prove contentious as it will give powers to reduce speed limits on the M50 from the present 100kmph to 40kmph in certain sections. That Bill is also likely to legislate for the first time to control forms of e-transport such as e-scooters and e-bikes.

There is also early legislation planned to put the Land Development Agency on a statutory footing, as well as to provide for Limerick City and County to have a directly elected Mayor.

The Human Tissues Bill, which will allow an opt-out system of consent for organ donation from deceased persons, is back on the priority list once more – this Bill has long been promised from successive governments.

There are a number of interesting Bills marked down for pre-legislative scrutiny. One will allow gardaí to wear digital recording equipment including cameras on their bodies. It will also allow gardaí to use automatic number plate recognition technology, a feature of policing in the UK and other countries.

Another one is a “Fagan-type” Bill, which makes it a crime for an adult to induce or groom children into committing offences.

Pre-legislative scrutiny will also be conducted on another Programme for Government, promise: the establishment of a Media Commission.