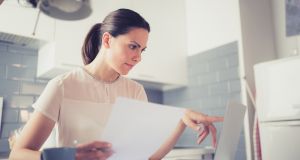 The Labour Party has published a Bill which it says would immediately enable adopted people to access their birth certificates. File photograph: Getty Images

The Oireachtas Committee on Children is expected to ask the chairwoman of the Mother and Baby Homes Commission, Yvonne Murphy, to come before it to answer questions about the recent report.

Meanwhile, the Social Democrats will on Wednesday call for the Government to issue an assessment of the commission’s report including what the Government’s view is of its findings. Some of the report’s findings have been sharply criticised by survivors of the institutions.

Labour senator Ivana Bacik said the Labour Bill would make this change in the “most straightforward way possible” by providing access to the “index which provides links between the adopted person and their birth certificate”. The Minister for Children Roderic O’Gorman has pledged to bring forward legislation this year, but Labour criticised this as too slow. Its new Bill would do the job much more quickly, it said.

On Tuesday the Seanad heard that a number of local authorities were expected to apologise for their roles and lack of action in addressing the abuse in the homes.

Green party Senator Pauline O’Reilly said she expected Galway County Council to make a “full apology” at its next meeting on January 25th and to state how it would attempt to make amends for holding meetings in the grounds of the Tuam home. Ms O’Reilly told the Seanad that “no one can tell me that those politicians did not know of the appalling conditions”. Local authorities ran some homes covered by the report.

Mr O’Gorman said many of the local authorities were “intrinsically involved in the payment of the fees for these homes”. He hoped other councils would adopt Galway’s approach.

He told Fine Gael Senator Mary Seery Kearney the report had been provided to the Garda and the Director of Public Prosecutions. He had also written to the congregations and charities about the need for apology, contribution to the redress scheme and access to records. “It is important that we bring those records into State control as part of the national archive we’re seeking to create.”

The Minister said in response to a number of Senators including Independent Victor Boyhan that they would look at the issue of “gagging orders” on victims who received redress.

Mr Boyhan spoke of his personal experience of growing up in institutional care. He said he was subject to drug trials by the Wellcome Foundation and said the pharmaceutical companies involved should make significant contributions to the restitution fund. The report found 13 vaccination trials had been carried out in the homes. The Minister said he had not yet written to the companies involved but would consider the best approach on the issue.