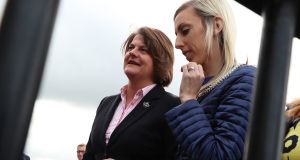 A familiar face is missing from the election posters clustered on lampposts in Upper Bann.

The outgoing MP, the DUP’s David Simpson – who has represented the constituency since 2005 – announced, unexpectedly, that he would not defend his seat in order to focus on his family after a widely-publicised extra-marital affair.

Picking up the baton for the DUP is Carla Lockhart. With a 13-year record as a councillor and, more recently, MLA in Upper Bann, she is ideally placed to repair any reputational damage the DUP may have suffered among the more devout elements of the party in the wake of the Simpson revelations.

Yet she is also a strong candidate in her own right. The youngest ever mayor of Craigavon, she is well-liked across the political spectrum; attacks on her over her appearance on social media earlier this month were condemned by politicians from all sides.

Going by the numbers, she is strongly placed to hold the seat for the DUP, and has inherited a comfortable majority from Simpson, who defeated his closest rival, John O’Dowd of Sinn Féin, by almost 8,000 votes in 2017.

O’Dowd is back again and with an increased profile thanks to his recent tussle with Michelle O’Neill for his party’s deputy leadership. The former education minister is viewed as one of the party’s heavyweights; that he polled a third of the votes in the deputy leadership contest shows he has significant internal support, and he will seek to reinforce his position with a strong showing at the ballot box on December 12th.

O’Dowd increased the party’s share of the vote by 3.3 per cent last time around, but in this Leave-voting constituency, it is difficult to see where the additional support needed to make up the gap can be found, not least given the pedigree of the SDLP candidate, Dolores Kelly, who – aside from a brief hiatus from 2015-17 – has been an MLA in Upper Bann since 2003 and can be expected to at the very least maintain the more than 4,000 votes her party received in 2017.

Nevertheless, O’Dowd has appealed for their support in these unprecedented times: “I am the only Remain candidate who can win this seat,” he said. “It makes sense for the SDLP voters to back me in the election in Upper Bann.”

Yet in this constituency, the threat to the DUP has traditionally come not from nationalism, but within unionism. Upper Bann was once the seat of the UUP leader, David Trimble; Simpson toppled him when he took the seat in 2005.

The UUP candidate Doug Beattie, a former British soldier who is one of the most high-profile of the party’s representatives, is a frequent and outspoken presence on television and radio, and is regarded as being among the more liberal of the party’s politicians.

He finished a distant third to Simpson and O’Dowd in 2017, yet this must be viewed in the context of an election night which saw the UUP lose both its Westminster seats and its vote share across Northern Ireland fall by almost five per cent.

Brexit is inevitably a factor this time, as is the continued lack of an Assembly, which collapsed in January 2017, amid a row over a botched renewable heating scheme.

This, says Lockhart, is a “massive issue” on the doorsteps; people are “very frustrated” at the continued lack of a devolved government at Stormont, she says, though she maintains this frustration is not directed towards the DUP. “They understand we are ready to go back in.”

Sinn Féin, for its part, says the party is “ready and committed” to restoring the Assembly,

The North’s Secretary of State has committed to fresh talks which will begin on December 16th, just four days after the election.

In May, Lockhart went into labour as the votes were counted in the North’s local elections; she was rushed from the count centre straight to hospital to give birth. This time she will no doubt expect a more predictable outcome.