Chris Johns: Who would I vote for in the UK? Anyone who would defeat the Tory candidate 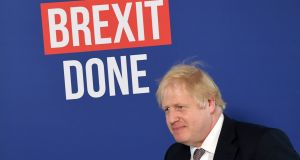 It’s been a long time since I was eligible to vote in the UK. Although able to vote in Ireland (but not for the President or constitutional change), I’ve rarely exercised that right. That’s a failing of sorts: Australia gets it right via compulsory voting.

The ancient Greeks viewed the exercise of the franchise as a civic duty. Mea culpa. I don’t really get Irish politics despite much time and effort. It’s tough to fall in love with GAA unless you grew up with it.

It must be the British accent, still strong, apparently after three decades of Irish residence, but I still get asked: “If you had the vote would you go for Fine Gael or Fianna Fáil?”

Lots of people ask me who I am going to vote for in the imminent UK general election. A Welsh working class upbringing explains a tribal approach to UK politics and sport. How could anyone ever like English rugby?

As an angrier young man I could never say the word Tory without appending the word scum. Perhaps that younger strident self paid too much heed to the words of heroes such as Nye Bevan, the [Welsh] health minister at the time of the founding of the NHS, one of the creators of the welfare state.

“No amount of cajolery, and no attempts at ethical or social seduction, can eradicate from my heart a deep burning hatred for the Tory Party that inflicted… bitter experiences on me. So far as I am concerned they are lower than vermin,” he said.

Bevan also said that a Tory election victory and an intelligent electorate were a contradiction in terms.

His language attracted much criticism at the time and ever since. But it has always found favour among the far-left fringes of the Labour party. Class hatred has never gone away, at either the extremes of left and right, but successive post-war governments have more or less managed to keep a lid on it. Until recently anyway.

One of the many criticisms levelled at Jeremy Corbyn is that he uses the language and policies of class war. Like a lot of things that are said about Corbyn, this is contentious. The big criticism, the accusation of anti-Semitism, is, of course, truly awful.

One of the many things that bother me is how Corbyn deals with the criticism and the accusations. Essentially he doesn’t. Which means his critics run riot.

Last week Corbyn made Andrew Neil look like a talented interviewer. Neil lobbed some questions that a school debating team would have anticipated and been able to deal with after about five minutes of preparation. Corbyn was utterly hopeless.

Anti-Semitism, dealing with terrorism, women’s pensions and the economy were all stumbled and mumbled over. Corbyn’s Brexit policy is easily mocked but a thoughtful adviser, if he had one, could actually point out all of the subtle ways that it does, in fact, make abundant sense. Corbyn, I fear, doesn’t have the sense to appoint such advisers.

I have less of a problem with Corbyn’s policies than I do with the charge that he is an incompetent class warrior who has allowed anti-Semitism to persist for too long.

The Tory Brexit has eviscerated the centre of British politics. The Conservatives have donned their class war armour

Ownership of electricity, water and gas utilities, the railways and public provision of broadband are widely described in the UK as “hardline socialist”. Indeed, even the non-tabloid press has piled on: several FT commentators have labelled the Labour manifesto as “socialism in one country”.

The last time I looked many European countries, not known for their left-wing zealotry, had similar policies. Ireland for instance.

There are many good arguments for higher public spending and taxation. A decade of wholly unnecessary austerity has caused most of the economic, social and political problems facing the UK.

Today it has never been cheaper to borrow: most governments currently have the equivalent of a negative mortgage rate. The trouble is that Labour’s policy pronouncements don’t convincingly make those good arguments. They sound like something a couple of unworldly academics and journalists would write sitting at a kitchen table after a bottle of wine or two.

Announcing an expensive and radical shift in women’s pension payments after the manifesto’s launch only added to the sense that they are making things up as they go along.

It’s been a long time since I voted in the UK. When I did I always voted Labour. In a way I’m thankful I can’t vote. Who would I vote for? If not Labour, then who? Despite all my criticism of Corbyn, should I nevertheless hold my nose?

Like many of my British friends I yearn for a candidate called none of the above. Or a party that espouses credible centre-left policies.

The Tory Brexit has eviscerated the centre of British politics. The Conservatives have also donned their class war armour, but behind a media cloak that conceals much of their true agenda. The defining issue of British politics, Brexit, looks to be unstoppable.

“Get Brexit done” will turn out to be the biggest lie of all, but the electorate looks to have fallen for it. Maybe Bevan was right in that regard at least. My vote, therefore, would be a tactical one: the local candidate best placed to defeat the Tory. It might even be a Labour vote.