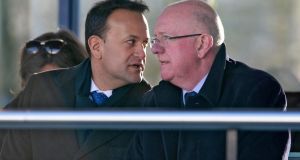 Taoiseach Leo Varadkar and Minister for Justice Charlie Flanagan at the Garda College, Templemore. Fine Gael’s leadership will be left with much to consider after the byelections. Photograph: Colin Keegan/Collins Dublin

Four byelections, 111,027 votes and 261,171 people who didn’t bother voting. Much controversy, lengthy counts and very likely the last outing to the polls before a general election next year.

What did we learn and what did we not learn from the byelections in Cork, Wexford and Dublin?

First, to the winners the spoils. It was a good day out for Fianna Fáil, which will bolster the party’s confidence in its own combat-readiness as it prepares for next year’s do-or-die general election.

A good day too for the Greens, who won their first byelection, demonstrating that their appeal in at least the middle class parts of Dublin will be a significant political dynamic in the coming period in Irish politics.

A very welcome – and much needed – boost for Sinn Féin in Dublin Mid-West, where the party’s housing spokesman Eoin Ó Broin did what most sitting TDs don’t do and helped successful candidate Mark Ward confound expectations by generating a huge turnout in favourable areas.

And a dispiriting, damaging day for Fine Gael which derails the swaggering confidence of the Government a month ago, questions Leo Varadkar’s vote-winning credentials and presents the Taoiseach with an awkward and urgent political problem: what to do about Verona Murphy?

The Wexford candidate’s comments about asylum seekers during the campaign alienated and alarmed many in her party. They stayed mostly schtum when she recanted and apologised.

Yet a video advertisement she posted – without party consent – on Friday night in which she complained of “character assassination” by the media has terrified them.

What if she did something like that during a general election? The Taoiseach would be asked about nothing else for 48 hours.

Sources at every level of the party have said that she should be removed from the ticket. That now seems to be a matter of when rather than if.

On a low-turnout, low-interest election it’s dangerous to draw firm conclusions from Murphy’s performance about how receptive voters are to a message that warns about immigration. But Fine Gael’s response now will tell us about how the party views such campaigns.

Whatever Fine Gael does, it seems inevitable that other candidates will try their own version of the immigration/asylum seeker message in the next election.

For those so inclined it won’t have escaped their notice that Gemma O’Doherty, a former Irish Independent journalist who specialises in promoting racist tropes and far-right conspiracy theories online, got more than1,000 votes in Fingal. Fine Gael can’t stop that. But it can stop what Fine Gael candidates might do.

But the most notable thing about Friday’s vote wasn’t Fine Gael’s woes or Fianna Fáil’s satisfaction: it was the apathy of voters, with turnouts at less than half the rate of general elections.

More than one in every two regular voters stayed at home. That means that extreme caution should be exercised when drawing lessons for the next general election. But there are some signposts all the same among those voters who turned out.

The first was that Fianna Fáil, having its best byelection day since 1996, seems in pretty good shape.

True, the performance in Dublin was less encouraging than in Cork and Wexford. Lorraine Clifford-Lee’s self-inflicted wounds hampered her chances of maintaining a real challenge in Fingal, while in Dublin Mid-West, while new candidate Shane Moynihan put in a decent performance, but no more than that.

On the measure that the party leadership really cares about – putting foundations in place for the general election – Fianna Fáil’s performance suggests it can hold what it has and possibly gain an extra seat in Wexford with new TD Malcolm Byrne.

A second seat in Fingal looks like an outside bet.

Shot in the arm

Sinn Féin’s triumph ends a series of bad election days for leader Mary Lou McDonald, giving the party a much-needed shot in the arm. Holding two seats in the general election in Dublin Mid-West is unlikely, but this is a good problem to have. The party also performed well in Cork – bolstering confidence of retaining the seat there – but less so in Wexford and Fingal.

The Green victory in Fingal was not a shock – Joe O’Brien had been widely tipped, after all – but the manner of his victory is encouraging to the party in a wider sense.

Growing the vote on half the turnout everywhere suggests that the Green brand can give candidates a headstart in similar constituencies.

The local and European election put everyone on notice that Green candidates everywhere will benefit from increased public concern about climate change and the environment. Saturday’s result only strengthens that expectation. And that could spell trouble for competitors for the urban middle-class vote, especially for Fine Gael and Labour.

Labour will be disappointed to come home empty-handed, but the party did decently in Fingal, in Cork and in Wexford. But it already holds seats in Fingal and Wexford, and will need to increase its share of the vote significantly to win back a seat in Cork. Dublin Mid-West looks a stretch on these numbers.

A positive note for Labour, though, was the poor performance of its centre-left competitors in the Social Democrats. That party’s brand hardly seems to resonate at all with voters. Despite its able and high-profile co-leaders in the Dáil, you would wonder what the point of it is now.

However Fine Gael spins it there will be fallout from these campaigns and results. An uncomfortable no-confidence vote in Minister for Housing Eoghan Murphy looms on Tuesday. A winter of discontent in hospitals is well under way.

Party figures expect Varadkar to deal with Verona Murphy, and to do so expeditiously.

A few weeks ago Varadkar was basking in the glow of a Brexit settlement, his TDs urging him to go for an early election. That narrative has now changed, and changed abruptly.