Legislation introduced as pressure increases on Green Party to back Bill 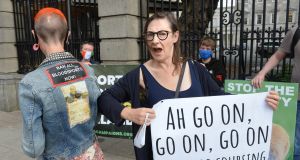 Legislation banning hare coursing has been introduced in the Dáil which would see participants fined €1,000 and facing up to six months in prison.

Introducing the Animal Health and Welfare (Ban on Hare Coursing) Bill, Rise TD Paul Murphy said Ireland is one of only three EU member states that have not banned coursing, which is already prohibited in Northern Ireland and Britain.

Father Ted actor Pauline McLynn is among the individual supporting the Bill, along with a number of organisations including the National Animal Rights Association, the Irish Council Against Blood Sports, the Irish Society for the Prevention of Cruelty to Animals and Not For Your Entertainment.

It is the third time anti-hare coursing legislation has been introduced in the Dáil.

“Hare coursing is a really cruel and barbaric practice,” Mr Murphy said. “Every year, over 5,000 hares are captured in the wild, they are held in captivity, in very close confinement to each other when they’re solitary creatures.

“They’re trained in which way to run and then they’re coursed. They’re released down a track, they run, and they’re chased by two dogs which are 10 times their size.”

Mr Murphy renewed pressure on the Green Party, calling for its TDs to back the legislation when it comes up for debate. In opposition, the Greens had supported a previous unsuccessful Bill to ban coursing.

The party also pushed, unsuccessfully, for such legislation to be included in the Programme for Government.

Mr Murphy criticised Green Party deputy leader and Minister for Arts Catherine Martin, who told a leadership hustings earlier this year that “if Fine Gael and Fianna Fáil were against the Bill, she would vote against it ‘with the heaviest of hearts’.

“Bluntly, I do not believe the hares or the animal rights campaigners will care about how heavy the Minister’s heart is if she votes to continue this cruel practice.”

Sinn Féin TDs previously voted against such a ban and will do so again when the legislation is debated. The party believes coursing should be regulated and that a ban would drive it underground.

The Bill now goes into the Dáil lottery system, where legislation drafted by individual TDs is chosen at random for discussion.