Calls for ‘recognition, respect and support’ of taxi sector 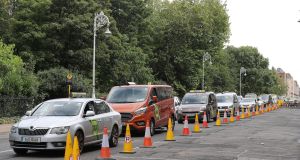 The “cosseted political class” and the Dáil suspension debacle were compared with the plight of taxi drivers during a debate calling for a comprehensive package to support the industry.

Aontú TD Peadar Tóibín said the taxi and hackney sector had virtually collapsed during the Covid-19 pandemic but drivers were left to get on with it.

“Yet we have the cosseted political class yesterday literally closed everything down. It is well known that their incomes are not going to be touched in any way.

“We had a decision made to close the chamber down with no discussion between the political parties.

“It’s not a logical situation that the Dáil can be so cosseted while at the same time 22,000 jobs in the taxi sector are under such pressure.”

He said the Government had to get out of the tunnel vision they’re in and “help struggling sectors directly”.

The Meath West TD was speaking during a private members’ motion calling for “recognition, respect and support” for the struggling sector, where 22 per cent of drivers are over 66 years old.

Thousands of taxi drivers protested outside Leinster House on Tuesday to highlight the impact of the pandemic on the sector.

Sinn Féin’s Darren O’Rourke, who introduced the motion, said many taxi drivers with pensions were in the business because they could not survive on their pensions.

He said the four taxi representative groups had five demands. They wanted a financial package to get back to work which recognised that the current “one-size-fits-all approach by Government is wholly inadequate for those sectors worst affected by Covid. This is particularly the case for drivers who work for themselves.”

They also want continued access for taxis to bus lanes, which Taoiseach Micheál Martin confirmed in the Dáil on Tuesday.

Mr O’Rourke said the groups wanted a moratorium on the issuing of taxi licences and the introduction of a buy-back scheme. They called for the disbandment of the taxi advisory committee and the establishment of a national transport forum.

Drivers also wanted an extension of the age limit for taxis for two years. Cars used by taxi drivers are expected to be no more than 10 years old.

Minister of State Ossian Smyth said that the National Transport Authority recognised has extended the age limit of vehicles due for renewal this year and it will be reviewed by the end of the year.

Minister of State Seán Fleming said it was not an issue that would be solved in one debate but would have to be carefully monitored. He acknowledged that taxi drivers were badly affected.

But he said they had not had a restriction on licences for the past two decades and “I’m a little bit surprised that people are saying it would be a help” and the Government would not support it because “there is nobody rushing to get into the industry”.