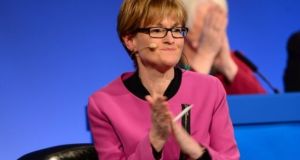 With the choice of Mairead McGuinness to be EU commissioner for financial services, Ireland is viewed as having fallen upwards – as far as was possible in the circumstances surrounding the resignation of Phil Hogan.

The gloomier predictions ahead of the announcement had Ireland being relegated to the Berlaymont equivalent of Siberia in retaliation for the government turning on our commissioner and causing President Ursula von der Leyen a problem.

With 27 commissioners – one for each member state – there aren’t enough powerful roles to go around, and top posts are squabbled over while fluffier portfolios are seen as a dummy prize.

Financial services is a significant brief that involves working on the creation of a single market for capital in the EU, and leading reforms of the financial and banking industry aimed to strengthen stability and avoid repeats of past crises.

This is significant in the context of an economic downturn caused by the pandemic that is expected to be historic in scale. It is also noteworthy given the challenges posed to the City of London by Brexit, which has already provoked the relocation of some financial services to EU hubs including Frankfurt, Amsterdam and Dublin.

With Paschal Donohoe holding the presidency of the influential club of finance ministers the Eurogroup, and Irishman Philip Lane as chief economist of the European Central Bank, there are now set to be a cluster of Irish figures in roles key to shaping the EU economic system at a moment of historic challenge.

How the deal was done

The name McGuinness began to circulate in Brussels while Mr Hogan was still clinging to his job, reflecting her status as one of the highest-profile Irish people in the capital, viewed as well able to handle any brief she might be given.

This reputation was crucial to securing the portfolio of Financial Stability, Financial Services and Capital Markets Union – known as “Fisma” for short – and the swap was secured because it did Dr von der Leyen several favours.

It helped towards her long-stated goal of gender balance in appointments, which she narrowly missed out on achieving when she formed her cabinet last year. If confirmed by the European Parliament and Council, Ms McGuinness’s appointment will mean the EU’s executive is the closest it has ever been to achieving gender balance among its commissioners, with 13 women and 14 men.

Dr von der Leyen also indicated Ms McGuinness’s 16-year experience in parliament and popularity among MEPs – reflected in the large vote tallies she has won when up for election for president and vice president – would help the commission win the support needed to enact its financial sector policy agenda.

Ms McGuinness’s profile also allowed Dr von der Leyen to limit her reshuffle and avoid destabilising the delicate balance of the commission, which is finely calibrated to reflect the power of the pan-European political parties, and is subject to their machinations and those of member states whenever jobs are in question.

Another small state, Latvia, now holds the powerful trade portfolio and has a kind of “Mega Commissioner” in the form of Valdis Dombrovskis, a details-focused ex-prime minister whose responsibilities in the European Commission have become ever more expansive since 2014. His appointment keeps the trade portfolio in the hands of the European People’s Party, which Mr Hogan belonged to as a Fine Gaeler.

Mr Dombrovskis has kept much of his prior brief of “An Economy that Works for People”, without the financial services subsection that was carved out for Ms McGuinness, while assuming trade as well. He will also remain the commission’s representative on the Eurogroup, apparently to avoid an overrepresentation of Irish people surrounding the affairs of the single currency, in line with commission practice of mixing nationalities where possible.

Nevertheless, Director General of financial services John Berrigan who will work under Ms McGuinness is Irish, making the division something of a rare green powerhouse.

Ireland’s reputation as a liberal outlier on banking and finance made some Brussels sources doubt that Dublin would be granted the portfolio prior to the announcement, and it was not welcomed by everyone.

“Ireland is not a fair tax player, and holding both Fisma and Eurogroup is not what the EU needs for a just and social answer to the crisis,” wrote Spanish MEP Iratxe García Pérez, who leads the left-wing Progressive Alliance of Socialists and Democrats in the European Parliament, the second-largest grouping after the EPP.

“Looking forward to the hearings,” she added darkly, a reference to the European Parliament scrutiny and vote needed to confirm Ms McGuinness’s appointment.

Ireland can expect to have its reputation as a financial cowboy raked over in the process ahead. But there is little for Ms McGuinness to fear in the parliamentary hearings. If she had not been nominated to be commissioner, it was widely expected that the MEPs would have elected her their next president.