Taoiseach says KPMG, unions need to talk to get ‘respectable package’ for workers 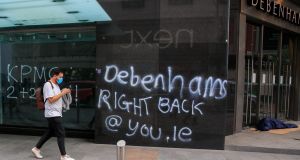 The Debenhams store on Henry Street, Dublin which was occupied by former workers over redundancy settlements. Photograph: Gareth Chaney/Collins

Debenhams Ireland liquidators KPMG and unions need to get back around the table to get a “respectable package” for the workers, the Taoiseach has told the Dáil.

Micheál Martin has warned however that “what we shouldn’t do to the workers is pretend that we can do everything and find a perfect solution”.

He said the workers had been on the picket line for far too long and some resolution had to be brought to the issue.

Mr Martin reiterated his view that the treatment of workers had been “shoddy, shabby and unacceptable notwithstanding the difficulties the company is in”.

Mr Martin told Sinn Féin leader Mary Lou McDonald, Solidarity TD Mick Barry and Independent TD Joan Collins that “we need to get all sides back to the table to get dialogue open again to see if some package could be put to the workers”, which he said “is beyond the government’s sphere of influence legally”.

But he said “there are a lot of false dawns presented to workers. There are real difficulties which there is no point throwing to one side.”

Six protesting employees were arrested in Dublin on Tuesday by gardaí.

The long running dispute has been ongoing for 152 days following the liquidation of the department stores’ liquidation of its Irish arm and the closure of its 11 stores with the loss of 1,000 jobs.Employees have been picketing the stores preventing the removal of stock.

A €1 million offer by the liquidators agreed with trade union Mandate was rejected by workers. Ms McDonald described the withdrawal as “a very provocative action”.

The Sinn Féin leader said she had previously asked the Taoiseach “to act immediately to intervene in support of the workers and to legislative to ensure this disgraceful action can never happen again”.

But she questioned what the Government had done in the wake of the “tactical liquidation” which had happened before in the case of Clery’s and nothing had been done since despite the promises of the political class.

Ms McDonald said Ireland was second only to Spain in terms of job losses in the second quarter of this year.

A lot more will lose their jobs she warned and that made this Debenhams dispute “so important for so many vulnerable workers”.

She said the Government had a number of options and it was time to act.

The Taoiseach said the Government had committed to reviewing the legislation and this would be completed in the fourth quarter of the year.

Mr Barry said workers formally rejected the offer as derisory and said it would have meant €615 for a part-time employee who had worked for 18 years and €135 for a worker on 10 years’ service.

The Cork North-Central TD said the workers were arrested on suspicion of trespass.

He said “the workers here are not the criminals, they are the victims” of a major company which had £95 million in the bank.

Mr Barry said the message from the workers was “remember Golfgate – time to play ball with the Debenhams workers now”.

Mr Martin rejected claims that he was aware of the offer before it was presented to workers and said he only went to the picketline because he was asked to do so by the employees.

Ms Collins called for the legislation to be changed with immediate effect and said it was unprecedented for workers on the picket line to be arrested for trespassing under public order legislation and had only previously been detained for defying court orders.

The Taoiseach said the legislation had to be properly researched with legal advice and could not apply to the Debenhams situation.