A shared island: ‘People can’t be brow beaten into it’ 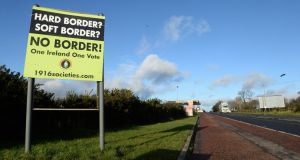 A border poll in the near future is an essential stepping stone for Sinn Féin. All other parties in the Republic are opposed to any plebiscite in the short term. File photograph: Dara Mac Dónaill

During the lead-up to the general election in February, most of the Irish political parties rediscovered an inner republicanism that had been dormant for some time. It was partly driven by Brexit and the way it opened up possibilities of recasting the Republic’s relationship with the North. A bigger part of it was to respond to Sinn Féin, and its insistence on an early Border poll.

Fine Gael began describing itself officially as the “United Ireland Party”. Fianna Fáil emphasised its “constitutional” republicanism, and its commitment to the “peaceful reunification of the island of Ireland as a single political entity”. Labour spoke of a new all-island state, in terms of it being best placed to deliver a good quality of life for all. Then right on cue, a row erupted over government plans to commemorate the RIC (Royal Irish Constabulary). It was a Fianna Fáil councillor (now a TD) Cathal Crowe whose questioning of the decision first came to public attention – although Sinn Féin did most of the running on the issue.

It was a reminder that societies have not moved as far beyond identity politics as might have been thought. There was another example of it post-election, when some southern members of the Greens displayed a frisson of tribalism when privately questioning the right of northern party members to vote on the Programme for Government. The fact that so many northern members decided not to vote, or expressed strong opposition to the programme, reflected the complexities involved when one party straddles two sovereign territories.

That said, the twin threats posed by Brexit and Covid-19 have revived debates about the relationship between the two jurisdictions, about the Border, about deeper co-operation and about the benefits of an all-island approach, especially when the alternative could be calamitous for everybody.

But other than Sinn Féin, no southern party has really traced out the possibilities – and the limits – of such co-operation. There has been surprisingly little discussion on what what such arrangements might actually look like. The Government’s new Shared Island Unit will begin to address those issues, but its terms do not seem to include questions surrounding territorial claims.

So what are the views of politicians from various parties on what a shared island means, and whether or not the quest for a united Ireland is to be something real or imagined?

Unsurprisingly, Sinn Féin has by far the most detailed policies. Its policy paper, developed by former leader Gerry Adams, includes provision for a single economy, a single national health service and a single education system. The state would have a new constitution and protection for all identities and traditions: cultural, societal and political. But it would be firmly an independent Ireland with the seat of government in Dublin. An essential stepping stone for the party is a plebiscite on the Border in the near future, to reflect demographic changes, namely the continuing growth of the Catholic/nationalist population.

The other parties emphasise the Belfast Agreement and the principle of consent as a default position. All are opposed to any plebiscite in the short term. Fianna Fáil has argued for a Border economic zone and an all-island economy plus deeper North-South and east-west relationships.

“I have very strong views on it,” says Crowe, who would reflect the general view within Fianna Fáil. “I am a constitutional republican.”

“Because of Brexit there is a strong economic argument for an all-island economy.”

While he says he would love to see a united Ireland, he said it would need “very extensive talks”. He says North-South and British-Irish bodies need to be strengthened before other areas – healthcare, education, policing, climate change – are examined.

He favours a border poll but not until certain political and economic milestones have been reached.

On flags and emblems, he thinks the Tricolour might not be an issue – because it represents both green and orange – but Amhrán na bhFiann could no longer be the national anthem.

Reflecting a view common in the post-conflict generation, he says: “I would be bitterly disappointed during the course of my lifetime if it did not happen.”

Fine Gael’s policies are not dissimilar. Its Dublin South TD Neale Richmond argues that if a poll were to be held very soon it would be a case of putting the cart before the horse, and that co-operation needs to be deepened first.

“Covid-19 shows the potential for shared developments across all policy areas. In transport, for example, they include the A5 motorway [to Derry], the Narrow Water Bridge, cross-Border greenways, the Ulster Canal, as well as examining high-speed cross-Border rail services.”

Labour favours a modern-day version of the 1983/84 New Ireland Forum, which proposed three different forms of a shared island: a unified state, a federal arrangement and a joint British-Irish administration.

Louth Labour TD Ged Nash says: “My view that very serious talks need to take place before we have a binary border poll.

“The poll is a key feature of the [Belfast] Agreement and there is a need for it. But what we propose first is a new forum on unity.

“We need a mature and grown-up conversation with those on the unionist side who do not agree with us about how they can be accommodated.

“A new Ireland has to envisage a new constitutional settlement. But the question we must ask is, how will that work in practice?”

“It is the first time the possibility of the economic interest in people of the North is best served being part of a united island,” she says.

“People can’t be browbeaten into it. You need to go back to [the] Good Friday [Agreement] and the principle of consent.

“It will be a much longer process than people anticipate. I’m very conscious of people in the unionist community who might feel their identity is threatened.

“We have to make sure we have a less centralised system of governance. Scotland has thrived since it got devolution.”

Green Party councillor Peter Kavanagh, who represents Clondalkin in Dublin, argues “the idea of Ireland as one nation in the world is a recent phenomenon. If we are talking about a shared island now, it can’t be the same lazy trope as the North joining the South.

“It’s not respectful of every culture. We need to identify the elements of a shared island and build a new nation that would be respectful of all cultures.”

Kavanagh says the climate change approach is a “one world” approach and a “one island” concept is part of that.

“An all-island approach to Covid-19 would be far more preferable. It’s the same for climate change. There should be [deeper] co-operation.”

Holly Cairns of the Social Democrats also believes an all-island approach would be optimal in many policy areas.

Aged 30, she says: “For my generation the debate [on Irish unity] is not as emotive. You can see the remnants of the Troubles in terms of divides, such as in schools, and more work needs to be done to stamp out those divisions.

“Most people would like to see a united Ireland but not against people’s wishes,” she says. She, like most others, points to consent as the cornerstone of any future change.