Youth restlessness could be reasons for increase in powerful fireworks, TD says 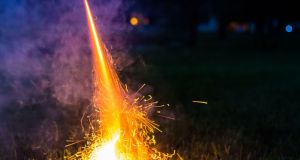 Older residents who are cocooning feel trapped by the endless racket of exploding bangers and rockets, Dáil told. Photograph: iStock

The Covid-19 pandemic and restlessness among young people could be responsible for the escalation in the use of increasingly powerful illegal fireworks, the Dáil has been told.

Sinn Féin TD Dessie Ellis said there has been an “unprecedented level of usage” of bangers, rockets and other fireworks since July, causing serious injury and damage, and it was happening at all hours of the day and night.

The Dublin North West TD said “strength and power of these fireworks is far greater than we’ve experienced in the past”.

He claimed that a ban on Garda overtime meant that community gardaí were told not to work beyond 7pm, which was contributing to the problem.

Mr Ellis praised as “absolutely brilliant” Garda action in recent years, particularly in Ballymun and Finglas in his constituency, to combat the “menace” of such misuse.

But he said “the problem is that community gardaí are not working past 7pm”. Stressing that “that has been confirmed to me”, Mr Ellis said “I don’t get it”.

He said fireworks have been “thrown at people, animals, cars, buses, shops, resulting in injuries and damage”. Rail services have also been targeted, mainly by young people.

Older residents who are cocooning feel trapped by the endless racket of exploding bangers and rockets, he said.

Mr Ellis added that children with autism are acutely affected by noise and suffer serious anxiety and stress as do their highly trained autism companion dogs.

“There may be enough legislation but the problem is there aren’t enough resources on the ground.”

Minister of State for Justice James Browne, who highlighted a range of legislation in place to deal with the issue, said Minister for Justice Helen McEntee will shortly launch a public awareness campaign, “which will feature in print media as well as online, including on social media platforms”.

He stressed that gardaí, with Operation Tombola, are “committed to tackling public disorder and anti-social behaviour through working with communities to reduce this type of behaviour and to enhance community safety”.