Theresa May ‘will not attend’ Stormont powersharing talks 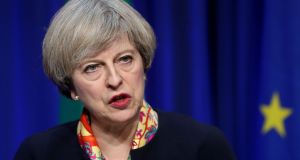 British prime minister Theresa May will not be flying to Northern Ireland to get involved in talks to restore powersharing at Stormont.

However, a British government source has said there is no reason for Ms May to become intensively involved in post-election talks at this stage.

The source said the more sensible approach is for Secretary of State for Northern Ireland James Brokenshire to take the lead, as has been done in the past.

It is understood Mr Brokenshire has been in regular contact with Ms May about the situation and is expected to fully brief her in cabinet on Wednesday.

While there is no rush for Ms May to directly involve herself in the talks, involvement at some stage in the future has not been ruled out.

The source said it is not inconceivable that she will attend at some point.

Talks have resumed at Stormont aimed at restoring the powersharing executive, but the parties have just three weeks to resolve their differences.

Otherwise, Mr Brokenshire could call another election or seek legislation to suspend the institutions.

Earlier, Lord Hain, now a Labour member of the House of Lords, said the London and Dublin governments had “taken their eyes off the ball” and that a summit was now required “to bring all the parties together to thrash out an agreement”.

Leaders of the main political parties are scheduled to have separate discussions with Mr Brokenshire again on Tuesday.

DUP party leader Arlene Foster is also to meet with her MLAs for the first time since the election.

She has denied reports that a third of her party’s newly returned members of the legislative assembly wanted her to step down.