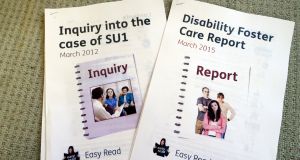 A commission of investigation into the alleged abuse of an intellectually disabled young woman at a foster home in the southeast will examine if health services deliberately hid information about her treatment.

Minister of State at the Department of Health Finian McGrath will outline the proposed scope of the inquiry to Cabinet this morning.

The commission, which will be asked to produce a report within 12 months, will be asked to prioritise the case of the young woman known as Grace. However, the chair will be given the authority to expand and intensify the investigation to include the cases of others cared for at the foster home if necessary.

Grace remained in the care of the foster family for more than 20 years despite repeated allegations of physical and sexual abuse. She was one of 47 children the family cared for over the years.

A decision had been taken in 1996 to remove Grace from the home following reports she attended a day care centre with a black eye and had bruising on her breasts and thighs. Her foster father had lobbied the then minister for health Michael Noonan seeking a reversal of the decision to remove her. The extent of the contacts made with Mr Noonan, the former minister of state Austin Currie and Department of Health officials will be examined by the commission.

It is unclear whether Mr Noonan or Mr Currie took any direct action in relation to this case. This will be examined by the commission, as will the appropriateness of their actions, whether they were in accordance with custom and practice, or if they can be considered an intervention and if it had any effect in Grace’s case.

The decision to remove her was overturned in 1996 and Grace remained in the care of the foster family until 2009. In the years that followed, Grace would experience more bruising on her thighs and breasts, black eyes and carpet burns. She was also allegedly defrauded of money, went years without medical attention and her general appearance was poor.

The investigation will be asked to examine how her carers became foster parents in 1989 and whether they were subjected to any statutory checks by the then South Eastern Health Board.

It will also assess whether any employees of the local health services investigated the claims of abuse and if that information was shared with other relevant bodies, including An Garda Síochána.

The care of Grace, the extent to which she was allegedly abused regardless of the location of the abuse, and by whom is to be examined.

Mr McGrath will ask the chair of the commission to examine whether Grace’s birth mother was kept fully aware of all information regarding her daughter’s case.

The woman, who gave Grace up for adoption, sought files from the Health Service Executive under the Freedom of Information Act but was denied them for two years. This will also be investigated.

Mr McGrath has also asked the commission of investigation to assess if the HSE deliberately suppressed or attempted to hide information about the facts of Grace’s case. This will include a look at any destruction of files or alleged threats to reduce the funding of the agency whose staff made protected disclosures about Grace’s case from 2009, when Grace was removed, until 2016 when a commission of investigation was first proposed by the Government.

Mr McGrath is understood to be eager for the work to focus solely on the case of Grace, insisting he does not want any further delays. However, the chair of the commission will be given the authority to expand the investigations to include other cases if necessary.

Three reports have been carried out into the treatment of Grace. Two of them were published by the HSE last week, years after their completion.

Disciplinary proceedings have begun into staff implicated in the alleged failings of care in the case of Grace.