Inquiry to examine ‘Grace’ case can be expanded, says Kenny 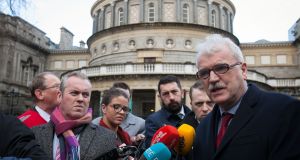 Minister of State for Disability Issues Finian McGrath who confirmed on Tuesday a commission of investigation has been set up into the care of ’Grace’ in a foster home in the southeast. Photograph: Collins

A commission of investigation into the alleged abuse of an intellectually disabled young woman at a foster home in the southeast can be expanded to cover other alleged abuse cases, Taoiseach Enda Kenny has said.

The commission was set up on Tuesday to examine the alleged abuse of a woman known as ‘Grace’ while she was living in a foster home in the southeast.

Mr Kenny said the Cabinet had earlier approved the terms of reference for the investigation.

“Its first imprimatur is to deal with that [‘Grace’] case and all the issues raised over the years,” he said.

The Taoiseach was replying in the Dáil on Tuesday to Labour leader Brendan Howlin who said ‘Grace’ had been the longest resident in the foster home and was probably the least able to complain.

There were 47 others who were there at the same time, he said.

These were contemporaneous witnesses who could cast light on what happened in a way that ‘Grace’, unfortunately, could not do, Mr Howlin said.

Earlier, Minister of State for Disabilities Finian McGrath said the inquiry would initially focus on Grace.

Mr McGrath said there would be an interim report within six months and the final report in 12 months.

“I want to focus on the ‘Grace’ case first and the allegations of abuse. She, and her mother, and her family, they deserve answers and my objective is to get them as soon as possible,” he said.

“I got great support from all of Cabinet today.”

He said senior counsel Marjorie Farrelly from Cork would lead the commission.

“She has a strong track record, a strong legal background, very competent and very decisive. I’m very optimistic she will get to the truth of these issues,” Mr McGrath told RTÉ News at One.

Relatives of some of those who were resident at the foster home in the southeast have expressed their anger and disappointment that the commission will focus on only one case.

“Bridget”, the sister of an intellectually disabled woman who stayed at the foster home, said she was very disappointed the inquiry would not include her sister’s case.

Former chair of the Public Accounts Committee and Fianna Fáil TD John McGuinness earlier on Tuesday called on Ministers to widen the scope of the inquiry to also include the 47 families concerned about whether their child suffered physical or sexual abuse in the same foster home as ‘Grace’.

Mr McGrath said he wanted the commission of inquiry to first focus on Grace’s case.

“A number of families have already said they didn’t want to get directly involved in the process but those families will not be excluded,” he said.

“I give a commitment to them that in this process they will be included and anybody whose voice wants to be heard with be dealt with a top quality person.”

While proposed terms of reference were brought to Cabinet, they have yet to be published.

The proposed terms called for the commission to examine the extent to which ‘Grace’ was allegedly abused, regardless of the location of the abuse, and by whom.

Under the proposed terms the commission will also assess whether any employees of the local health services investigated the claims of abuse and if that information was shared with other relevant bodies, including An Garda Síochána.

It is also expected the chair of the commission will examine whether Grace’s birth mother was kept fully aware of all information regarding her daughter’s case.

The woman, who gave Grace up for adoption, sought files from the Health Service Executive (HSE) under the Freedom of Information Act but was denied them for two years. This will also be investigated.

Mr McGrath has also asked the commission of investigation to assess if the HSE deliberately suppressed or attempted to hide information about the facts of the case.

This will include a look at any destruction of files or alleged threats to reduce the funding of the agency whose staff made protected disclosures about Grace’s case from 2009, when she was removed, until 2016 when a commission of investigation was first proposed by the Government.

Disciplinary proceedings have begun into staff implicated in the alleged failings of care in the case of ‘Grace’.