Sinn Féin president Gerry Adams has hailed the latest election as a 'watershed' as Northern Irish leaders prepare for three weeks of challenging talks to save their devolved government. Video: REUTERS 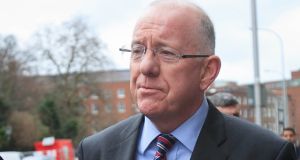 Minster for Foreign Affairs Charlie Flanagan: ‘The onus is on the parties themselves. That is the essence of devolution.’ Photograph: Gareth Chaney/Collins

Sinn Féin and the DUP have been told they will have to do the “heavy lifting” if the Stormont institutions are to be re-established following a second set of elections to the Northern Ireland Assembly in less than a year.

As the North’s politicians prepare for the opening of talks on a new powersharing executive, Minister for Foreign Affairs Charlie Flanagan said the success of the discussions was “primarily an issue for the parties” in Northern Ireland.

Speaking to The Irish Times, Mr Flanagan said the Irish and British governments would assist the process, “but the heavy lifting is on the part of Sinn Féin and the DUP”.

In a signal to Sinn Féin, Mr Flanagan said he had heard demands from parties for “full implementation” of the Belfast Agreement, but this “doesn’t sit well with a refusal to resurrect the institutions”.

“The onus is on the parties themselves,” he said. “That is the essence of devolution.”

Mr Flanagan also said he did not want to see parties setting “red-line” issues in advance of the talks.

Unionists were last night still trying to come to terms with the fact that they no longer have an overall majority of seats in the Northern Assembly, and that Sinn Féin is just one seat behind the DUP.

The election saw Sinn Féin win 27 seats, while the DUP, which had 10 more seats than the republican party in the last assembly, won 28.

The Ulster Unionist Party dropped from 16 to 10 seats, prompting leader Mike Nesbitt to announce he is to resign.

Northern Secretary James Brokenshire and Mr Flanagan spoke yesterday before a round of calls to the leaders of the Northern parties.

Taoiseach Enda Kenny discussed the election result and the forthcoming talks between the Stormont parties with British prime minister Theresa May by telephone.

Both leaders agreed to speak on the matter again at a European Council summit in Brussels on Thursday.

Politicians such as Sir Jeffrey Donaldson and Simon Hamilton of the DUP and Gerry Adams, Michelle O’Neill and John O’Dowd of Sinn Féin have indicated a willingness to find a way forward.

There was contact over the weekend between the parties, including between the DUP and Sinn Féin. Further contacts and talks are expected as the MLAs turn up at Stormont today to register to the new Assembly.

The big stumbling block to a deal is the Sinn Féin insistence that DUP leader Arlene Foster cannot be part of the next Executive until a public inquiry into the Renewable Heat Incentive (RHI) scheme is completed.

Mr Adams qualified that demand somewhat at the weekend by indicating that if retired judge Sir Patrick Coghlin, who is chairing the inquiry, exonerated Ms Foster over RHI in a preliminary report she could then take on the First Minister post.

But he repeated that Ms Foster first must stand aside from the Executive until the inquiry adjudicates on her role in the “cash for ash” debacle, which could result in an overspend of more than £450 million.

So far senior DUP politicians such as Mr Hamilton and Sir Jeffrey are standing by Ms Foster, who has indicated that she intends to remain as DUP leader.

Mr Flanagan, who will be in Belfast for talks on Wednesday, said he was not looking beyond three weeks for a deal to be done, but indicated there could be “flexibility” if more time was required to strike a deal.