Foster resists SF demands not to return as first minister

Sinn Féin president Gerry Adams has hailed the latest election as a 'watershed' as Northern Irish leaders prepare for three weeks of challenging talks to save their devolved government. Video: REUTERS 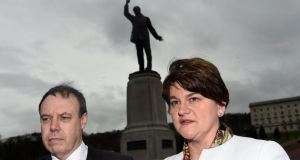 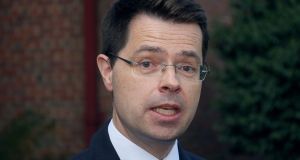 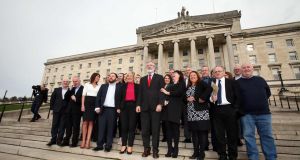 Talks to save Northern Ireland’s devolved government have run straight into an obstacle on Monday as Democratic Unionist Party (DUP) leader Arlene Foster resisted renewed demands by Sinn Féin for her not to return as first minister.

Sinn Féin has for weeks insisted it will not support the nomination of Ms Foster as first minister while investigations get under way into abuse of the Renewable Heat Incentive (RHI) scheme which culminated in the collapse of the previous administration.

Ms Foster remained defiant, however. “That is not the only red line they have put up before negotiations. I think it is a foolish thing to do,” Ms Foster told reporters.

“Our vote was up in every single constituency,” she said regarding last week’s Northern Assembly election. “I think that is a pretty good basis on which to continue as DUP leader.”

She did not categorically rule out temporarily removing herself from consideration for first minister. Sinn Féin has indicated it could back another DUP nominee for the position while Ms Foster stays on as party leader.

DUP deputy leader Nigel Dodds said it would be “perverse” to suggest Mr Foster quit after the party added 22,846 votes to its 2016 tally.

Earlier Ms Foster said there was no revolt in her party after Sinn Féin had surged at the polls.

The DUP saw its 10-seat lead as the biggest grouping at Stormont cut to just one following Thursday’s election.

Ms Foster said she was going into the negotiations to restore powersharing wanting to do a deal.

Sinn Féin has demanded she step aside as first minister while the RHI scheme she oversaw, which could cost taxpayers up to £490 million (€567 million), is investigated. An inquiry into its operation is not expected to make any findings for at least six months.

Asked about feelings within her party Ms Foster said: “There is no revolt.”

“Arlene Foster’s position is a matter for herself. Our position is on the record and very clear in relation to what we think needs to happen,” Sinn Féin’s Northern leader Michelle O’Neill told reporters earlier.

“There has been a shift in political landscape. There has to be real change.”

The parties have three weeks to form a new power-sharing government to avoid either devolved power returning to London for the first time since 2007 or the prospect of a third election in less than a year.

Sinn Féin, whom Ms O’Neill said would meet all other parties throughout the week, also wants Northern Ireland to set rights for Irish language speakers into law, another demand Ms Foster has said she will never accede to.

Sinn Féin president Gerry Adams attacked the British government for what he described as its determination to “repeat the mistakes of the past” by failing to implement previous agreements and forcing Brexit on the North.

He also spoke of concerns the Irish government is “turning a blind eye to the belligerent approach of the British government”.

“If progress is to be made we need to hear from the governments that they will oversee the full implementation all agreements,” he said.

In separate co-ordinated statements on Sunday, Mr Brokenshire and Minister for Foreign Affairs Charlie Flanagan warned there was a “limited window” to resolve differences and get a functioning parliament back up and running.

Mr Brokenshire said responsibility lies on the shoulders of the DUP and Sinn Féin.

He added that “confidential” talks would start immediately to resolve other outstanding issues over the full implementation of peace agreements and how the legacy of the Troubles is addressed.

Mr Flanagan said it was of the utmost importance for the people of Northern Ireland that the political institutions, established under the Belfast Agreement, promptly resume, “not least so that they can effectively engage with the issues raised by Brexit”.

The UUP dropped from 16 seats to 10 at the election resulting in Mike Nesbitt quitting as leader.

He will stay on in the role until a new leader is appointed next month but was joined for talks with Mr Brokenshire by a number of UUP figures including newly appointed chief negotiator Tom Elliott and former Stormont minister Danny Kennedy, who failed to get elected at the weekend in Newry and Armagh.

Mr Elliott is not convinced a deal within three weeks on all issues bothering parties is possible but says there is potential for a “a deal with heads of agreement” to get the Executive up and running again.

It has been confirmed that that the first plenary session of the northern Assembly will be held on Monday, March 13th at 4pm.