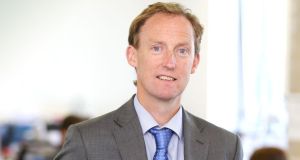 Former Fianna Fáil TD Barry Andrews has been appointed as director general of the Institute of International and European Affairs (IIEA), a Dublin-based think-tank.

Mr Andrews, a former Minister for Children, stepped down last October as chief executive of the aid agency Goal, which is reeling from a US government investigation into alleged collusion and bid-rigging in southern Turkey, where international aid agencies base their Syria operations.

More than half of Goal’s senior management team has left the organisation since the US investigation came to light last May and the agency is in talks with Oxfam Ireland about a potential merger.

Mr Andrews, who is due to take up his new position in early April, will succeed Tom Arnold, a former chief executive of the aid agency Concern and current chairman of The Irish Times Trust.

In a statement announcing the appointment, the institute’s chairperson Ruairí Quinn said he believed Mr Andrews’s experience as minister, parliamentarian and chief executive of Goal provided him with “political and administrative skills” that would be of real value to the institute at “this uniquely challenging time”, when Brexit was at the heart of its work.

Mr Andrews said he was delighted to take up the position and looked forward to working with Mr Quinn, his board and the staff to “further enhance the IIEA as a forum for the promotion of high quality political and public debate on issues of central importance to Ireland’s future.”

Thanking the outgoing director general, Mr Quinn said Mr Arnold had made “a major contribution” to the institute since taking up the position three years ago, “building on his unique range of relationships at Irish, European and international level.”