Oireachtas members will still be entitled to access electoral registers 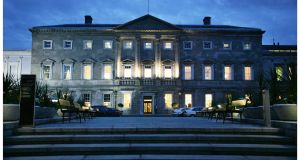 Leinster House: some Oireachtas members fear retention of routine queries of a sensitive nature may be affected by the General Data Protection Regulation. Stock photograph:

TDs and Senators are worried they will no longer be allowed keep personal information on their constituents when data protection changes come into effect next year.

With the European Union General Data Protection Regulation (GDPR) coming into force on May 25th, 2018, some Oireachtas members have said they fear retention of routine queries of a sensitive nature may be affected.

The Office of the Data Protection Commissioner has written to TDs and Senators asking them to submit any queries through a dedicated email address about how the GDPR will impact on their role.

Oireachtas members have until mid-September to submit their queries, after which written guidance material on the GDPR will be finalised and distributed.

There is also concern among some Oireachtas members that the use of the so-called marked register could be restricted when the new laws are in place.

Available to purchase for six months after every election, the marked register records the names and address of those who have voted and those who have not.

Hard copies are destroyed once six months have passed, but some political parties and individual politicians have computerised the information to maintain records stretching back over many elections.

Those who access the records must sign a declaration undertaking not to process the information provided for any commercial, direct marketing, or any other non-statutory purpose and to comply with the provisions of the Data Protection Acts.

However, a spokeswoman for the Office of the Data Protection Commissioner said existing provisions allowing for the public inspection of electoral records “would not appear to be in contravention of the new data protection laws, when they come into effect”.

The spokeswoman confirmed the Data Protection Commission was in a consultation process with TDs and Senators and was seeking their input on aspects of GDPR implementation where they required guidance.

“This is in line with our ongoing mission to provide guidance to all data controllers which will assist them in their preparations for GDPR readiness.”

The proposed legislation must be in place by May next year to give effect to the new EU regulation and an associated directive on sharing data for law-enforcement purposes.

An Oireachtas spokesman said a group of officials had been established to prepare for the GDPR and would report to the Houses of the Oireachtas Commission on an implementation programme.

Part of this programme would be to provide guidance to Oireachtas members on their obligations under the GDPR.