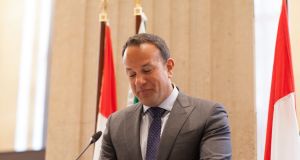 Ireland’s international presence will be doubled in less than a decade through increased diplomatic staff and a greater number of embassies and agencies, Taoiseach Leo Varadkar has said.

Mr Varadkar said he wants to double Ireland’s representation around the world through its network of embassies and agencies focusing on investment, tourism, culture and food.

The Taoiseach outlined his “Ireland’s Global Footprint 2025” plan at an Enterprise Ireland breakfast in Toronto during his official visit to Canada.

In his speech, Mr Varadkar said he wanted to outline “Ireland’s place in the world in the years ahead” and sought to cast his announcement as a “major statement on Ireland’s future foreign policy”.

“Ireland is emerging from what has been a lost decade for many of our citizens, and it is clear to me that we are emerging with a greater sense of self-confidence and ambition for what we can do as a country,” he said.

“That national self-confidence requires that we always be ambitious, visible and active in promoting the interests of our nation on the international stage.”

He said to fulfil the ambition of Ireland as “an island at the centre of the world . . . we need to greatly increase our international presence.”

Mr Varadkar said his new plan will set out milestones between now and its completion, and will outline the benefits it will bring in “greater investment, tourism and trade; stronger links with our diaspora and increased cultural exchange”.

“This is a country where we really do get huge value for limited resources and where I – and I imagine everyone in this room – can clearly see what the benefits would be from an increased diplomatic and agency presence.”

The Taoiseach said that “some nations have lost their sense of place and self-confidence in this interdependent world of ours”, but added that Ireland and Canada “retain a strong and deep commitment to openness, multilateralism, individual freedom and free trade”.

He claimed he and Canadian prime minister Justin Trudeau are both “convinced that this is a genuine moment of opportunity for our two countries”.

The cost of the new plan will not be known until the plan is finalised this year, and in some cases could be the allocation of new staff to existing missions or offices, and other cases opening new offices entirely.

Mr Varadkar gave the example of New Zealand, where there is no Irish embassy, and the fact that the IDA has no presence in Canada, an area that will be addressed by the strategy. He added there is no permanent Irish representation in important cities such as Los Angeles and Mumbai.

“In part we need it as response to Brexit. Because of Brexit, Ireland needs to get out there in the world a bit more, expand our markets, let other parts of the world know about our culture.

“But even if Brexit wasn’t happening, we should do it anyway because it makes sense. If you compare us to similar-sized countries like Denmark, for example, they have a much greater presence around the world than we do and we should be trying to catch up with that.”

2:40 Minneapolis bristles with tension once again over police killing