Budget 2018: Taoiseach responds to Doherty view that pensioners are not the most vulnerable 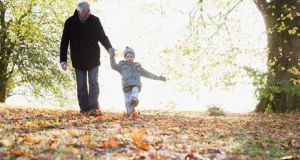 Minister for Social Protection Regina Doherty said: “We have Christmas bonuses to consider, we have increases in pension payments to consider, but there are far more vulnerable people in Ireland today than our old age pensioners.” File photograph: Getty Images

An increase in the old age pension will be included in the October Budget but the exact level has yet to be decided, Taoiseach Leo Varadkar has insisted.

The Taoiseach was responding to comments from Minister for Social Protection Regina Doherty, who said there are more vulnerable people in Ireland than old age pensioners.

Mr Varadkar said the Programme for Government commits to increases in the old age pension every year at a level at least in line with inflation.

He also confirmed he and Minister for Finance Paschal Donohoe are considering setting out the Government’s tax and spending commitments over the next three years in the forthcoming Budget.

Ms Doherty had said she would have to take a number of payments into consideration for this Budget.

“We have Christmas bonuses to consider, we have increases in pension payments to consider, but there are far more vulnerable people in Ireland today than our old age pensioners,” she said.

“That is not to say they are not deserving - they absolutely are. But, if you look at the poverty index, lone parents and children are probably at the biggest risk of poverty in this country.”

In response, Mr Varadkar said that pensioners will get an increase in their weekly payment.

“What I’ve said is that there is a programme for government commitment that the pension will increase every year in line with or ahead of inflation,” he said during a visit to Canada. “But the specific decisions... No budget decisions have actually been made yet.”

He was also asked whether some people were in greater need than others for this budget, a so-called “hierarchy of need”, and responded that the Government “will of course have to prioritise”.

“It is not possible in any one budget to do everything you would like to do or even everything you should do, because the more important thing we have to do is balance the books - and it is our intention to balance the books next year and reduce the debt - and while that might not be politically popular in the short term, it’s absolutely the right thing to do in the longer term for our country.

“The Budget is not yet decided and we will of course have to prioritise. One of the things we are considering doing, and if it’s possible to do we will, is to try to set out over a few budgets – over two or three years – what our intentions are in terms of tax, in terms of welfare and spending, to give people, to give business, to give organisations a little bit more certainty about what’s going to happen in the years ahead.”