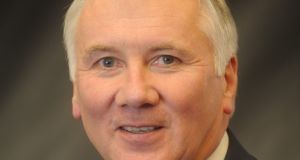 Sir Malcolm McKibbin: has been chairing the talks process between the various political parties in the North in an attempt to re-establish devolution

Sir Malcolm McKibbin, the former head of the Northern Ireland civil service, is to join the board of Co-operation Ireland following his recent retirement.

The chairman of Co-operation Ireland, Dr Christopher Moran, said it was “an inspired move for the organisation”.

Sir Malcolm, who was the most senior adviser to the former first and deputy first ministers, was also secretary to the Northern Ireland Executive. More recently he has been chairing the talks process between the various political parties in the North in an attempt to re-establish devolution.

Sir Malcolm said he believed the work of Co-operation Ireland is crucial at this stage, “especially given the challenges that both Brexit and the current stalemate at Stormont present across the island of Ireland and between the UK and Ireland”.