Leo Varadkar responded to comments from Minister Regina Doherty, who called on Ireland to stand up to Mr Trump 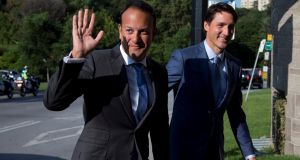 Taoiseach Leo Varadkar has insisted US president Donald Trump is welcome to Ireland confirming he would not rescind his invitation to come here.

Mr Varadkar was responding to comments from Minister for Social Protection Regina Doherty, who called on Ireland to stand up to Mr Trump.

Ms Doherty said those who did not stand up for diversity and equality would have to bear responsibility.

She said: “In terms of inviting the President to our country or us going to his country, we are in strange times.

“You have to respect the authority of the post that he holds aside from the personality and the personal views he holds.

“But I really believe if you don’t stand up for diversity and inclusiveness then you have to bear some of the responsibility for some of what is going on.”

Ms Doherty said each world leader is responsible for providing equality of opportunity for every citizen, regardless of race or gender.

She believes Mr Trump needed to live up to that challenge and respect people of all races in America.

Speaking in Canada, the Taoiseach insisted Mr Trump’s invitation to Ireland still stands and confirmed he would be accepting the invitation of the president to visit Washington on St Patrick’s Day.

He said: “The invitation stands and he has invited me to visit Washington DC in March for the traditional St Patrick’s Day meeting and I intend that to go ahead as well. Ireland and America are countries that have a long-standing bilateral relationship much greater than any President, any Taoiseach or any government at any particular time and it is important to we maintain that friendship.

“Also, true friends, whether countries or individuals, must be able to speak truth to each other and you can only do that by speaking to each other, not ignoring each other so the invitation stands and of course his invitation to me to visit Washington DC in March stands also.”