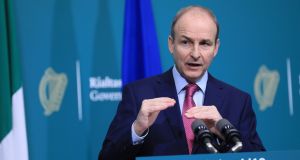 Taoiseach Micheál Martin has urged EU leaders to “hold the nerve” as negotiators try to hammer out a trade deal with the UK before Brexit takes effect on January 1st.

Recognising the increasing pressure to secure a deal, Mr Martin said that EU leaders need to give the bloc’s chief negotiator Michel Barnier the space to “get a deal over the line”.

“We are now at a very critical and sensitive point in the negotiations. I want to see a deal done and I believe a deal is possible,” he told a webinar event hosted in Dublin.

In a thinly-veiled reference to the warnings from other countries including France, the Netherlands and Denmark about too much ground being ceded to the UK, the Taoiseach said that he had confidence in Mr Barnier and his negotiators to deliver “a balanced deal”.

Some EU states are pressing for negotiations to be extended rather than rushing a quick deal on bad terms. Mr Martin said a deal is better than no deal but that a deal could not come “at any cost” and the EU had to “weigh up and balance the interests of those that we have to represent”.

“Pressures build up as you get to the end of a negotiating situation. We can sense that in our sherpa meetings,” he said, referring to the senior officials who represent the 27 EU leaders in contacts between member states.

“My view is to hold the nerve. Negotiations are intensifying but we can’t have 27 negotiating, we can’t all be negotiators at the table. We have got to have faith and trust in the negotiating team to get a balanced deal over the line.”

The Taoiseach was speaking at a webinar on Brexit and future relations between Ireland, Britain and the European Union hosted by Fianna Fáil MEP Barry Andrews.

Mr Martin said it was clear there was “the landing zone” for an agreement given the substantial work completed on preparing texts on all of the key negotiating issues.

A deal with no tariffs or quotas would “make a huge difference” to the sustainability of trade between Ireland and Britain, Mr Martin said, while a no-deal Brexit would have a “severe” impact on Ireland’s agri-food business and on the western seaboard and Border counties, north and south.

The Taoiseach said he was concerned about small and medium-sized businesses being ready for the “dramatic increase” in the volume of border customs declarations and documentation that will be required for trade with Britain even if there is a trade deal agreed between the two sides.

Britain formally exited the EU in January but a transition period leaves EU rules in place until the end of the year to allow people and businesses prepare for yet-to-be-agreed arrangements. EU rules on the internal market and customs union will cease to apply to Britain on January 1st.