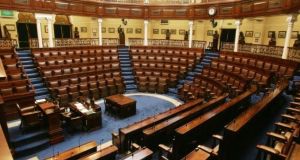 A record €389 million will be paid out next week through the annual social welfare Christmas bonus, and 311,000 people on the Pandemic Unemployment Payment (PUP) will receive the benefit, the Dáil has been told.

Minister for Social Protection Heather Humphreys also said €130 million has been paid this week in arrears to 286,000 PUP claimants.

They had not received payments because of missing information in their applications, but Ms Humphreys said her department had worked with applicants and “we got them into payment”.

She also told Solidarity TD Mick Barry that since March 1.5 million claims have been processed and 13 million payments worth €4.3 billion have been made to 800,000 people.

Paying tribute to Department of Social Protection staff “in every single county who kept the show on the road”, the Minister said they had processed “the equivalent of seven years’ worth of jobseeker applications in eight months”.

But she acknowledged the long delays for people applying for PPS (personal public service) numbers. She said staff were reassigned to deal the huge increase in claims because of the pandemic and “getting money into people’s pockets was the absolute priority” above all other activities.

Ms Kerrane said she had been inundated by people who could not get a PPS number. She said one person could not buy a house and faced a 20-week delay while another person who was moving to Roscommon from England had been told by Revenue they had 30 days to import their car but getting their PPS number would take longer.

The Minister said department staff had put in a “monumental effort” to ensure pandemic payments and other supports. She said it was sometimes easy to take it for granted that payments would be there every week but there was a lot of work in that.

Mr Barry criticised Government plans to tax the pandemic payment as “another blow” when workers not only lost their jobs “but their incomes fell off the cliff”.

The Cork North-Central TD said it would be a retrospective tax. The PUP “came in as an urgent needs payment and these are explicitly exempt from tax”.

The payment had been made since March13th , was only put on a statutory footing on August 5th and would now be taxed from March.

“This is retrospective taxation and is an extraordinary decision,” he said.

Ms Humphrey said taxation was a matter for the Department of Finance but “we all know if we earn over a certain amount of money that we’re all liable to tax, and as I understand it that’s the rule across the board”.

But the pandemic payment had cushioned hundreds of thousands of individuals and families from sudden income shock, she said.