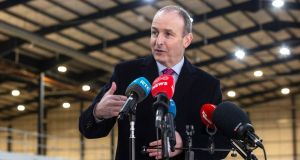 The Taoiseach reminded the Dáil what happened when the country slowly opened up again during the summer after the first lockdown. Photograph: Julien Behal Photography/PA Wire

Ireland is the second-best small country in the world in which to fight Covid.

But does anybody give a flying Finn?

“One would hardly realise that with the tension about the place and the attacks and the criticism and the giving out and so on,” grumbled the Taoiseach. “The bottom line” is that Ireland has turned in the second best performance of the second wave in Europe, with only Finland achieving a better result.

Micheál Martin thinks that this is positively Finntastic and well done to everyone for making the effort, we’ve been brilliant.

Well, almost everyone, which is why we must remain vigilant.

The Taoiseach reminded the Dáil what happened when the country slowly opened up again during the summer after the first lockdown.

“Restrictions were lifted, certain things happened... And all of you know it,” he said pointedly, trying to suppress a smirk. “All of you know it in terms of certain locations. Certain events.”

To what could he have been referring?

In advance of the evening debate on Covid-19 and what might come next, Micheál was frustrated over the lack of credit for our response to the pandemic in recent weeks. It would be nice to hear some positive remarks for a change, what with Finland and Ireland up there at the top of the Covid gold star chart.

“Will someone acknowledge that?”

In vain, Micheál beseeched a stony-faced Opposition far too busy peppering for a row on the Helen McAbsEntee mystery to bother with clapping him on the back.

So the Taoiseach answered himself.

“I think it needs to be acknowledged,” he shrugged aloud.

Not so, responded all seven strands of political opinion across the floor, in a very rare display of complete unity and common purpose.

They have been saying all along that what needs to be acknowledged is why the Taoiseach and his Minister for Justice are making such a song and dance about a standalone statement by the Minister to the Dáil on an issue they both continue to insist is simple, clear-cut and a model of best practice. And why the normally even-tempered Micheál Martin is getting so angry over their insistence that Helen McAbsEntee come into the chamber in accordance with long-established procedure to answer questions about the process – not the personalities – involved in the recent selection of our newest Supreme Court judge.

This is the second week they have piled on the pressure over the Government’s refusal to field the relevant member of Cabinet to account for her ministerial actions to the Dáil when required to do so by the Opposition.

It’s not that McAbsEntee doesn’t want to give answers, the Fianna Fáil Taoiseach has been painstakingly explaining on her behalf, it’s because the “format” requested by her fellow parliamentarians is not acceptable. The Government wants to use the highly controlled, questions submitted in advance with little scope for follow-up format of routine ministerial questions. The Opposition is, rightly, having none of it.

For nearly 90 minutes, at the beginning of the Dáil week, Micheál was subjected to a sustained onslaught from the leaders of all the main opposition parties, the leaders of the various Independent groupings and sundry other TDs from across the chamber who were equally determined to see McEntee take responsibility for her brief and face her peers.

Throughout a stormy Leaders’ Questions and Order of Business, the Fianna Fáil leader stuck rigidly to his wan defence of his Fine Gael Minister and events which happened for the most part on Fine Gael’s watch when he wasn’t yet Taoiseach. He continued to cling to his sturdiest piece of political flotsam: that Séamus Woulfe was appointed to the Supreme Court on the “recommendation” of the Judicial Appointments Advisory Board (JAAB) which is chaired by none other than the Chief Justice and includes “the presidents of the Four Courts” and other legal luminaries.

He keeps forgetting that the three sitting judges who sent in expressions of interest cannot apply through JAAB (although he wasn’t told about them anyway), nor was he aware if any names of potentially suitable candidates were submitted by third parties.

Having been thoroughly savaged by an Opposition clearly intent on making the Government adhere to procedure, Micheál flummoxed all of them by bullishly declaring: “There is no, eh, actually big deal here in terms of how Justice Woulfe was appointed.”

They did not agree. And the more the Taoiseach holds out on backing his Minister’s strange refusal to address an issue which is, in his words, “actually no big deal”, the more suspicious he makes this apparently routine appointment sound.

Mary Lou McDonald, Alan Kelly and Róisín Shortall led the charge, vowing the Opposition’s legitimate request for a standalone session will not be rebuffed by the Government. They were roundly and soundly backed by Paul Murphy, Peadar Tobin, Mattie McGrath, Thomas Pringle, Pádraig Mac Lochlainn, Duncan Smith, Martin Kenny and Michael Healy-Rae, representing all shades of the political spectrum.

“You are creating the most dangerous precedent I have seen in this House since I came in here,” said Kelly.

“I, for the life of me, cannot understand why you are continuing to block legitimate parliamentary work,” marvelled McDonald, remembering how he “led the charge” for such accountability in 2017 when a former attorney general was appointed to the Court of Appeal.

“You’re blackguarding the House,” roared Mattie McGrath, later lambasting “the most feeble and in inept Taoiseach I’ve ever met... Oh, and by the way, commiserations for Sunday as well.” (Cork lost to Tipp in the Munster Football final).

Michael Healy-Rae reminded Micheál that when you’re in a hole you should stop digging and asked him to “relent” and “you know in your heart and soul” the leaders aren’t going to give up and “you’re not going to win”.

Even Micheál laughed. He got the joke.

There was a hint of bravado when he told Paul Murphy the last Minister dragged into the House was the Tánaiste, “and I don’t think you laid a glove on anybody.”

This controversy makes no sense if there is nothing to hide.

It seems like a strange hill to choose to die upon when an hour or so in the Chamber last week would have done the trick.

Unless, for some unknown reason, they can’t take the risk?

This is far from over.