Maginnis showed ‘very little insight into the impact of his behaviour’ 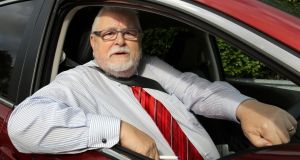 Lord Maginnis portrayed himself as a ‘victim of a conspiracy by people who disapproved of his views’. File photograph: Paul Faith/PA Wire

Northern Ireland peer Ken Maginnis should be suspended from Britain’s House of Lords for at least 18 months for bullying and harassment of three MPs and a security guard, the peers’ standards watchdog has recommended.

The recommendation from the Lords Conduct Committee follows an investigation into the Northern Irish peer’s treatment of a parliamentary security officer and MPs Hannah Bardell, Luke Pollard and Toby Perkins.

The committee suggested Lord Maginnis’ suspension could be extended if he does not undergo training and change his ways.

The ex-MP for Fermanagh and South Tyrone was investigated after being “verbally abusive” to security officer Christian Bombolo when asked to show his parliamentary pass in January.

The SNP’s Ms Bardell, who witnessed the incident with Mr Bombolo, said Lord Maginnis would have been “shown the door” in “any normal workplace”.

Noting his return is dependent on the peer undertaking a behaviour course, the Livingston MP tweeted: “However, I consider it likely that if this had happened in any normal workplace in the UK and someone behaved in such a systematically abusive, bullying and homophobic way, which the report clearly states he has, they would be shown the door.”

According to the committee’s report, Ms Bardell complained that when she attempted to intervene in the clash between the peer and the security guard, she was treated “rudely and aggressively” by Lord Maginnis, who later used “homophobic and derogatory language about her” in comments to the media.

The Metropolitan Police confirmed in January, after the clash was made public, that it was investigating an allegation of hate crime at the House of Commons.

Lord Maginnis was also investigated for using homophobic language in relation to Mr Pollard in February 2020 after becoming disgruntled by the Labour MP’s chairing of a meeting of the Armed Forces All-Party Parliamentary Group.

Complaining about Mr Pollard’s conduct to chair of the group James Gray MP, he sent an email with the subject heading “Discrimination by Homos”.

Shadow environment secretary Mr Pollard said in his complaint that he was “shocked and surprised that this type of behaviour would happen within Westminster” and said the emails written by the Northern Ireland politician made him feel like a “victim of abuse”.

In the committee’s report, it said Lord Maginnis, who is against gay marriage, showed a lack of contrition.

“In his oral appeal Lord Maginnis showed very little insight into the impact of his behaviour on the complainants, and no remorse for the upset he had caused,” the committee said.

“To the contrary, he portrayed himself as a victim of a conspiracy by people who disapproved of his views and insisted that all his conduct had been provoked.

“He also continued to refer to the complainants in a disobliging and sometimes offensive manner.”

Responding to questioning from the standards commissioner about the incident with Ms Bardell, the 82-year-old is said to have accused the MP of having a “serious mental illness and psychopathic disorder” and labelled the accusations a “lying tirade”.

Peers will have to approve the report before the suspension comes into force. - PA