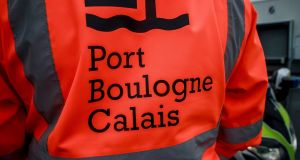 A staff member at the port of Calais on Thursday, as French authorities make preparations ahead of the end of the Brexit transition period on December 31st. Photograph: Christophe Petit Tesson/EPA

British threats to reintroduce legislation that would violate last year’s Northern Ireland protocol are a misguided attempt to put pressure on the EU in the last stages of negotiations, the Minister for Foreign Affairs has said.

Simon Coveney was in Paris to see the French ministers of foreign and European affairs. He decided to travel to Paris rather than speak to Jean-Yves Le Drian and Clément Beaune on the telephone or by video conference “because we are at a very sensitive moment in Brexit” and he needed to discuss in person “how a deal can be finalised” and, failing that, “how we can prepare together for the consequences of a no-deal, should that happen”,

If agreement is not reached between the EU’s negotiator Michel Barnier and his team in London, “the British government is saying they will reintroduce the elements of the Internal Market Bill which the House of Lords rejected and took out of the Bill,” Mr Coveney said.

The Bill would give British cabinet ministers the power to ignore elements of the protocol, which was intended to prevent the creation of a border on the island of Ireland. “That is a breach of international law,” Mr Coveney said. “It is also a breach of trust and faith in the context of these negotiations.”

Mr Coveney said there are two separate pieces of legislation under consideration: part five of the Internal Market Bill, and what is being called a Finance Bill. Both would “threaten to breach in law the protocol on Ireland and Northern Ireland”, he said.

Mr Coveney said that if the legislation is passed, it would “send a signal to the EU that [Britain] are not interested in doing a deal on a future relationship agreement”.

“I think that this is as much a negotiating strategy as it is anything else... Some strategist seems to believe that this is going to pile more pressure on the EU and that it creates negotiating currency for the UK,” he said. “I think it is counter-productive.”

Ireland is “in sync” with France on Brexit, Mr Coveney said.

After Brexit, France will be the closest land mass to Ireland in the EU, Mr Coveney noted. While France will never replace Britain, “ I think you will see the Irish-French relationship become even stronger. Commercial activity and trade relationships between Ireland and France are going to grow very significantly, partly linked to Brexit.”

Asked whether France’s reported attempt to secure the lion’s share of the EU’s €5 billion Brexit compensation fund was an irritant, Mr Coveney replied that “everybody wants a share of that fund... France has a call on some of this money too. Of course they do. This isn’t a competitive process per se.”

The fund is designed “to deal with the disruption of Brexit and to support sectors and countries that are most disrupted by the change that Brexit is imposing on us”. Mr Coveney said he “would be very surprised if Ireland wasn’t first in the queue”.

He “made Ireland’s case very strongly” to Johannes Hahn, the EU commissioner for budget and administration, who is responsible for the fund. “Ireland is the country that is most disrupted, by a considerable margin in my view.”

Mr Barnier has warned his British counterpart David Frost that unless a breakthrough is made by Friday, there may not be time to ratify an agreement before the December 31st deadline.

Mr Coveney said he was optimistic because “for Britain and Ireland, the cost and the disruption that will flow from not being able to put a future relationship agreement in place in the next few days is very, very significant”.

It was not merely a question of tariffs and quotas kicking in on January 1st. “It’s also the relationship that gets damaged because of the blame game that follows.

“The consequence of failure is surely understood in 10 Downing Street as well.”