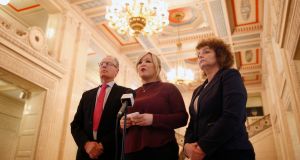 Sinn Fein’s Michelle O’Neill, Gerry Kelly, and Caral Ni Chuilin during a press conference at the Parliament Buildings, Stormont, Belfast, as formal talks to restore Northern Ireland powersharing have been paused until after the General Election. Photograph: Peter Morrison/PA Wire

Stormont talks aimed at forming a government in Northern Ireland have been “paused” until after the UK general election on June 8th. On Thursday delegations from the five main parties — DUP, Sinn Féin, SDLP, UUP, Alliance — met with the British and Irish government at Stormont Castle after it became clear that campaigning and compromising at the same time was going to prove difficult.

Foreign affairs minister Charlie Flanagan and British government secretary of state James Brokenshire were part of round table discussions with the parties and it was agreed that formal negotiations aimed at establishing an Executive will be paused until after the election. However, some bilateral meetings will continue.

Structured talks involving all the key players will resume following the election, with the aim of forming a government before the June 29th deadline, Mr Brokenshire said. The Northern secretary also said since the results of the snap Assembly election on March 2nd “some progress has been made” on developing a Programme for Government and on the legacy of the past. He went on to acknowledge there are also a number of outstanding issues.

“All the parties involved recognise it is vital devolved government, and all of the institutions established under the Belfast Agreement and its successors, resumes in Northern Ireland as soon as possible,” he added. “Although formal round table talks are paused until after the General Election, a range of bilateral discussions will continue, with a view to building on progress.”

Minister Flanagan believes there will be sufficient opportunity after June 8th for the talks to resume and for the parties to proceed with the task of forming a new executive and work on implementation of outstanding commitments from previous agreements. He spoke of the Government’s continued commitment to support and facilitate the parties in their efforts to reach agreement. “I remain available to engage bilaterally with the parties in the weeks ahead, including on the unfolding Brexit negotiations, and look forward to participating in the resumed talks process after 8th June,” he added.

Alliance Leader Naomi Long said she “hugely frustrated and disappointed” by the election being called, the decision to pause formal negotiations and the impact a lack of government is having on society and services in the North. “The people who elected us need a working Assembly, now more than ever.”

1 Coronavirus: No new Covid-19 deaths reported in State for first time since March
2 Coronavirus: What will reopen in Ireland’s phases to ease restrictions and what are the dates?
3 Dominic Cummings says he does not ‘regret’ actions and behaved ‘legally’
4 Unidentified man has been in Irish psychiatric hospital for 30 years
5 Man admits rape of boy after drugging him with pain relief substance, court told
Real news has value SUBSCRIBE