Inner-Dublin regeneration plan to be acted on, Taoiseach says 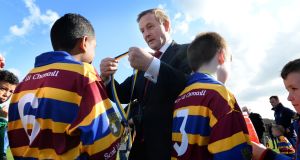 Taoiseach Enda Kenny has said the Government will act on the advice of a report it commissioned to help regenerate Dublin’s north inner city.

Speaking at the opening of Scoil Uí Chonaill GAA club’s new facilities in Clontarf in Dublin, where he presented medals to young players, Mr Kenny said: “We’ve a special interest in seeing an area that was neglected, that was left behind . . . and where difficult things have happened in the past . . . be brought right up to the centre.”

He added: “Isn’t that the same issue that applies across Europe in many cases, where people were forgotten and left behind? We don’t want to see Scoil Uí Chonaill, the club or the children who are part of it, in any way left behind.”

The Taoiseach also said that the Government will keep investing in sport. “As the engine of the economy continues to improve, this is an area where Government will continue to support voluntary effort throughout the country, across the entire spectrum of sport, because it’s so important.”