First hearings of ‘cash for ash’ inquiry’ expected in autumn 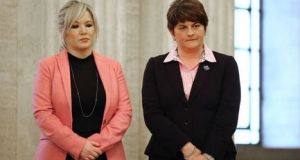 Sinn Féin’s Michelle O’Neill and DUP leader Arlene Foster. Sinn Féin has repeatedly said it will not support the DUP nominating Ms Foster as first minister while the RHI inquiry is under way.

The first public evidence hearings of the inquiry into Northern Ireland’s “cash for ash” green energy scheme are expected to commence this autumn.

On Thursday, at the Long Gallery in Stormont, retired Court of Appeal judge Sir Patrick Coghlin chaired the first preliminary hearing of the investigation into the botched Renewable Heat Incentive (RHI) non-domestic scheme.

Sir Patrick said the inquiry panel had “a very significant amount of evidence” to gather and consider. He revealed the inquiry has already served over 125 statutory notices to organisations and individuals compelling the production of information.

The RHI scheme, set up in 2012 by the enterprise department when the now DUP leader Arlene Foster was its minister, aimed to move farmers and businesses away from fossil fuels to green heating methods such as burning wood pellets. However, a failure to cap usage meant those signed up to the 20-year deal received £1.60 in subsidies for every £1 spent.

The predicted cost to the Northern taxpayer, which at one point was estimated at £490 million (€581.2m), and the political fallout from the flawed scheme precipitated the collapse of the Stormont government last January.

Sir Patrick said the inquiry would explore four broad themes: the design and implementation of the scheme; its operation, promotion and supervision; the imposition of cost controls in 2015; and the circumstances around the suspension of the scheme in 2016.

The timetable for proceedings is expected to be outlined at another preliminary hearing in June, and oral evidence hearings are expected to commence this autumn in the senate chamber in parliament buildings.

Sir Patrick promised to “fearlessly examine evidence...without interference from any quarter in order to establish the facts about the scheme and those connected to it”.

He pledged the inquiry would be independent, and stressed the exercise was not about convicting anyone of a crime. It was an investigatory fact-finding inquiry rather than an adversarial trial.

Stormont’s economy and finance departments, and the Gas and Electricity Markets Authority (Ofgem) are expected to be “core participants” in the inquiry.

TUV leader Jim Allister and the UUP’s Mike Nesbitt and Steven Aiken were among those at Thursday’s preliminary hearing.

Mr Allister said he trusted the inquiry “will get to the whole truth in this matter”.

“They have already served 125 notices under section 21, which is a surprisingly high number, but indicates a quite wide ambit in regard to this inquiry. I think it is good they are using this because it brings compulsion to bring documentation... and that is all part of the essential background to enable the inquiry to be effective.

“I trust what we are witnessing is the beginnings of a inquiry which will not be influenced by political considerations.”

A government has yet to be formed in the North following the snap Assembly election on March 2nd. Sinn Féin has repeatedly said it would not support the DUP nominating its leader Ms Foster as first minister while the RHI inquiry was under way.

Sir Patrick spoke of it being in the public interest for the inquiry to proceed expeditiously, but said it was not possible to set an accurate time scale for its conclusion.

Mr Allister said early predictions that the inquiry would take around six months seemed highly optimistic at this stage given the scope of the investigation.