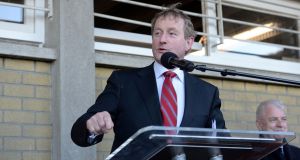 Taoiseach Enda Kenny: “What we want to do there is to put in place a legally waterproof situation where it’ll be perfectly clear for everybody that what’s at stake here are proper world-class facilities for expectant mothers and for pregnant women.” Photograph: Dara Mac Dónaill

Taoiseach Enda Kenny has said the Government will ensure the transfer of ownership of the National Maternity Hospital (NMH) to the religious-owned St Vincent’s Healthcare Group is “legally waterproof”.

Mr Kenny was responding on Thursday to the resignation of Dr Peter Boylan from the executive board of the NMH.

“I know Peter Boylan for many years. In fact, our three children were born when he was master there [Holles Street]. But his decision is one for himself,” Mr Kenny said.

He said the Government had on Wednesday made a decision to build two hospitals: the National Children’s Hospital, “which has been on the go for very many years”, and the National Maternity Hospital.

Mr Kenny also referred to Minister for Health Simon Harris’s request for a month-long process during which a new ownership structure for the maternity hospital could be agreed. “And the breathing space that the Minister requested has been given to him,” Mr Kenny said.

“What we want to do there is to put in place a legally waterproof situation where it’ll be perfectly clear for everybody that what’s at stake here are proper world-class facilities for expectant mothers and for pregnant women, so that if issues arise that need hospital treatment they will be on the campus of St Vincent’s.

“The Minister will come back to Government in the next a number of weeks and we can conclude on that and move on to provide the National Maternity Hospital to the standard that women are entitled to expect in this day and age.”

Dr Boylan, a former master of the NMH, announced his decision on Thursday following a meeting of the executive board on Wednesday night over the hospital’s proposed move to a site on St Vincent’s Elm Park campus, which is owned by the Sisters of Charity.