Government to give final approval for children’s hospital

The Cabinet has approved the construction of the new National Children's Hospital at the St James's Hospital site in Dublin. Construction will begin 'within weeks' and it is expected to be open by 2021. Video: Bryan O'Brien 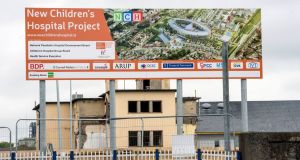 The car-parking facilities, which will accommodate more than 1,000 vehicles, will be funded on a private basis. Photograph: Brenda Fitzsimons

The Government will give the green light to the €1 billion national children’s hospital on Wednesday with the expectation it will begin operating in early 2022 at the latest.

Minister for Health Simon Harris will bring a memo to Governmentseeking final approval for the project which will be the biggest building project ever undertaken in the State.

He will also seek approval for the two satellite centres on the Tallaght and Connolly hospital campuses.

The construction tender for the facility on a site at St James’s Hospital in Dublin has been awarded to BAM Ireland which is expected to begin work “within weeks”.

The projected cost of the flagship hospital has risen dramatically from €400 million in 2012 to more than €1 billion now.

Even after St James’s campus replaced the Mater hospital as the chosen site, there has been controversy surrounding the choice of location. Groups have formed campaigns for the hospital to be located in Blanchardstown, or close to the M50.

Senior sources said the current thinking was that children’s hospitals operated best when bilocated with an adult hospital. It was pointed out that St James’s was the hospital with most specialised services in Ireland. In addition, the Coombe maternity hospital is expected to be integrated in future, as part of the site’s master plan.

Capital costs for the delivery of the project and the satellite centres now stand at €1.07 billion, of which just a fraction over €1 billion is exchequer-related.

The car-parking facilities, which will accommodate more than 1,000 vehicles, will be funded on a private basis. These elements are expected to cost €67 million.

The sources said the reason the projected costs had escalated was because of the standards of fitting the new hospital will have. It will be fully digital with electronic records and charts available with an integrated and sophisticated software system.

The sources also pointed construction costs had risen but there would be no differential between the tender price and the final outlay. In the past such big projects had resulted in extra costs being incurred during development. It was stressed that it would not happen in this case.

Defending the location, the sources said the hospital would be well served by local transport and with the main public-transport hubs such as Heuston and Connolly. It was accepted that there were some shortcomings but it was pointed out that none of the sites was ideal.

The main difficulties and challenges are expected to be encountered during the construction phase over the next five years.