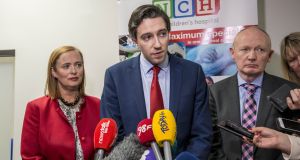 Simon Harris’s support is seen as a significant boost for the Coveney campaign, as he is the first senior Minister to align himself with a candidate. Photograph: Brenda Fitzsimons

Minister for Health Simon Harris has become a key figure in the Fine Gael leadership campaign for Minister for Housing Simon Coveney.

Mr Harris has yet to publicly declare for any candidate in the contest to replace Enda Kenny as Taoiseach and leader of Fine Gael.

However The Irish Times has learned Mr Harris has attended a number of pivotal meetings this week aimed at planning Mr Coveney’s leadership campaign strategy.

The focus of the discussion has been planning Mr Coveney’s strategy ahead of the impending leadership election.

It is understood Mr Coveney’s brother Patrick has been a key figure in the preparations.

Several of those involved declined to comment when contacted by The Irish Times yesterday.

However, Mr Harris’s support is seen as a significant boost for the Coveney campaign, as he is the first senior Minister to align himself with a candidate.

It will come as a major setback to any potential leadership run by Tánaiste Frances Fitzgerald, who has said she is seriously considering participating in the contest. Mr Harris was seen as a key supporter of Ms Fitzgerald and his decision to back Mr Coveney may end Ms Fitzgerald’s ambitions.

The leadership contest is expected to take place within a matter of weeks, with senior figures expecting Mr Kenny to stand aside by the end of May.

Mr Coveney and Minister for Social Protection Leo Varadkar are expected to be the two candidates. Mr Varadkar held a meeting with his key advisers yesterday, including Minister of State Eoghan Murphy and Fine Gael TD John Paul Phelan.

Minister for Education Richard Bruton has also said he is seriously considering entering the race, but it is not expected that either he or Ms Fitzgerald will participate in the contest.

Senior sources on both sides insist the contest is too close to call, with many believing Mr Coveney has the support of the majority of the party’s Senators. Mr Varadkar is believed to have the overwhelming support of Fine Gael TDs.

Mr Kenny has said he will inform his Fine Gael colleagues of his intentions when he returns from the key European summit in Brussels this weekend.

It has also been confirmed Mr Kenny will be travelling to Canada to meet prime minister Justin Trudeau at the beginning of May. The schedule for his short trip to Canada means he is not expected to attend next week’s parliamentary party meeting on Wednesday.

Sources believe Mr Kenny may inform the Dáil or make an announcement at Government Buildings signalling his departure date when the time comes.