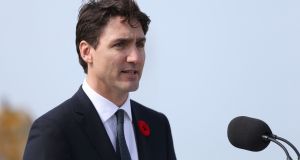 Enda Kenny has a series of engagements in the Canadian cities of Montreal and Toronto, beginning with a meeting with Canadian prime minister Justin Trudeau . Photograph: Charly Triballeau/AFP

Taoiseach Enda Kenny appears likely to delay making his leadership intentions clear for another week because he will be travelling to Canada to meet prime minister Justin Trudeau.

Fine Gael TDs had been expecting Mr Kenny to make an announcement about his position at next week’s parliamentary party meeting following the European Council summit this Saturday.

’s schedule for his short trip to Canada means he is now not expected to attend the weekly party meeting, due to take place on Wednesday evening at 5.30pm. Mr Kenny has a series of engagements in the Canadian cities of Montreal and Toronto on Thursday and Friday, beginning with a meeting with Mr Trudeau and including business meetings and a reception with members of the Irish community.

While in Canada, Mr Kenny has engagements with chambers of commerce, Enterprise Ireland and Tourism Ireland.

Meanwhile, Michel Barnier, the European Commission’s chief Brexit negotiator, could address a joint sitting of the Dáil and Seanad on May 11th.

Fianna Fail TD Stephen Donnelly said the invite was his initiative and the initial response had been positive.

Speaking in the Hague last Friday, Mr Kenny said he would make his leadership intentions very clear once he was happy that the “ground rules for Brexit” were in place.

He said guidelines for the negotiations around Britain leaving the European Union would be agreed when EU leaders meet in Brussels on Saturday, April 29th.

In February, Mr Kenny told his TDs and Senators he would deal with his leadership of Fine Gael “effectively and conclusively” upon his return from the United States following his St Patrick’s Day visit.

He subsequently said he was staying in office to see the beginning of the Brexit negotiations and establishment of the Northern Ireland Executive.

The Assembly negotiations have been extended until the end of June.