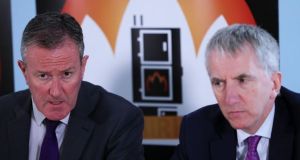 A Sinn Féin minister in the Northern Ireland government sought permission from an unelected party official for a proposed action in the cash-for-ash scheme, an official inquiry has concluded.

The conclusion contradicts the claim by Mr Ó Muilleoir who testified before the inquiry, led by Sir Patrick Coghlin, that the former minister was asking Mr Howell about the “timing” of the action rather than his permission for a business plan on the botched scheme.

The backroom interactions between Mr Ó Muilleoir and Mr Howell, a senior figure in Sinn Féin, were the subject of much focus during the recent General Election campaign when Fine Gael and Fianna Fáil criticised the ties between Sinn Féin and unelected republican officials.

Mr Howell was a member of Sinn Féin’s ard chomhairle (national executive) and brought out of retirement by the late Martin McGuinness, then deputy First Minister, to chair Sinn Féin’s “crisis committee” to deal with the crisis engulfing the Stormont institution at that time.

He was Sinn Féin’s director of foreign affairs during the Troubles and a long-time confidante of former party leader Gerry Adams, acted as a go-between on behalf of the IRA leadership and senior Irish-Americans in the 1990s during the early days of the peace process.

The official investigation into the RHI scheme considered the wording of an email sent by Mr Ó Muilleoir to Mr Howell on January 24th, 2017 informing of a key meeting he was going to have concerning a business plan to create an interim solution to end the runaway scheme.

“Would you be content if I were to sign off the business plan on Wednesday afternoon?” Mr Ó Muilleoir said in his email to Mr Howell.

In testimony, the former minister rejected the suggestion that he was asking Mr Howell whether he was content that he, a minister who was democratically responsible to the Assembly and the Northern Ireland electorate, should comply with the advice received from department officials.

Mr Ó Muilleoir said he was letting Mr Howell know what was going to happen in his capacity as head of a Sinn Féin “crisis committee”, in case it may have had implications for the Northern Ireland peace process and that he was only informing about the “timing” and not seeking consent.

The official investigation did not fully agree with Mr Ó Muilleoir.

“The inquiry finds that the wording of the 24 January email was not limited to approving the timing but also encompassed seeking Mr Howell’s consent to the proposed course of action by an executive minister,” the 656-page report says in one of its findings.

“The inquiry is conscious that the evidence that it received from Minister Ó Muilleoir was received in the course of an inquiry instituted in order to restore public confidence in the workings of government. Transparency and accountability are key elements in maintaining such confidence.”

Sir Patrick’s investigation stressed that it heard “no detailed personal evidence about Mr Howell or his role in the Sinn Féin party other than that he was the chair of the Sinn Féin ‘crisis committee’.”

He concluded that the “heightened degree of suspicion, lack of cooperation and lack of trust between the political parties” with respective responsibility for the departments in charge of the RHI scheme in the run-up to the scheme being reined in “did not facilitate the particular and pressing need for the achievement of a timely solution of the RHI problem in the public interest.”

The inquiry noted the pledge of the ministerial pledge office in the Belfast Agreement “to serve all the people of Northern Ireland equally” and “to promote the interests of the whole community represented in the Northern Ireland Assembly towards the goal of a shared future.”

The RHI scheme, which began in 2012, paid businesses to switch from oil and gas to environmentally-friendly heating but costs soared because of the flawed way it was set up.

The public inquiry into the scheme was set up in 2017 to investigate what went wrong.

Ms O’Neill testified in written evidence that it was not the role of another minister or department to scrutinise the work of another as it would be impractical and duplicate expertise.

However, in response, the inquiry’s report found that although this was correct, there was “plainly a role for information sharing, knowledge exchange and dialogue between departments and their officials where responsibilities overlap or converge, including (where appropriate) the provision of challenge and warnings.”

The inquiry noted Ms O’Neill’s department was represented on a inter-departmental working group on sustainable energy that was established to ensure a coordinated approach and ensure that “departmental energy-related policies were in concert.”

Evidence shown to the inquiry disclosed that her department was “in a position to, and did understand a good deal about how the RHI scheme worked and how beneficial it could be to claimants, particularly those in the agricultural industry with high heat requirements.”